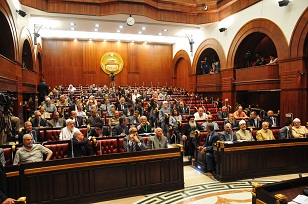 The draft constitution as it is currently written gives citizens “license to discipline” each other according to Amr Moussa.

The former Arab League secretary general made the criticism at the Constituent Assembly’s Monday meeting, at which it approved 14 constitutional articles in the basic principles of state section and referred them to the drafting committee for finalisation.

The assembly is set to discuss and vote on the remaining 14 articles of the section on Tuesday afternoon in the second of a series of sessions designed to complete the constitution draft by the 19 November deadline.

Heated debate surrounded several articles before they were voted on, the first of which was Article 10, which reads: “The state and society are obliged to sponsor and protect ethics and public morals, empower authentic Egyptian traditions, take into account a high level of nurturing, religious and patriotic values, scientific facts, Arab culture, the historical and cultural heritage of the people, as regulated by the law.”

Moussa objected the phrasing, saying that it gave people the “licence to discipline” others and called for the removal of the word “society” and entrust only the state with these duties.

Other members said the article allowed citizens to take on positive roles and that Islamic Shari’a preaches “promoting virtue and preventing vice” as a duty of all people. The article was approved without amendment.

Several members signalled their disapproval of Article 11, which states: “The state protects the cultural, civilisational and linguistic unity of Egyptian society, and works towards Arabisation of sciences and knowledge.”

They called for the replacement of the word “unity” with “pluralism” to express Egypt’s cultural diversity. Salafi Al-Nour Party member Younes Mekhion objected to that suggestion. “The Egyptian people are a people with only one culture,” he said.

“The Egyptian people have a lot of cultures and you need to realise that there are sectors of the people who speak different languages,” said assembly Chairman Hossam El-Gheriany.

Mekhion responded that this was only El-Gheriany’s opinion and that he opposes the word pluralism because it would allow groups like the Nubians to demand their language be officially recognised by the state.

The article was amended so that “unity” is replaced with “elements” and approved.

Article 7 was amended to include the phrase “within the limits of the law” at the end. It originally read: “Egyptian society is based on justice, equality, freedom, mercy, social solidarity, camaraderie between its members regarding protecting their lives, honour and money, and achieving sufficiency for all citizens.”

The phrase was added since the article it entrusts society with protecting lives, honour and money and so the law should govern the way in which citizens do this protecting. Moussa suggested “society” be replaced by “the state” so that groups or militias do not take law enforcement into their own hands but the suggestion was turned down.

“It was popular committees that protected Egypt in the absence of security,” said El-Gheriany.

The remainder of the first 14 articles were passed without much debate. They were referred to a newly created smaller drafting committee for final phrasing. The assembly is set to finalise the first section of the constitution Tuesday afternoon.