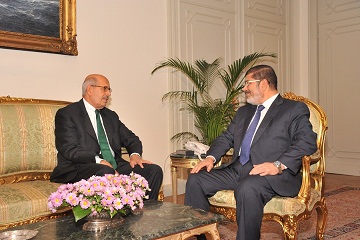 Al-Dostour Party Chairman Mohamed ElBaradei expressed his reservations over the Constituent Assembly and explained his party’s political vision to President Mohamed Morsy in a Tuesday meeting.

“ElBaradei made some reservations over some constitutional articles and the Constituent Assembly itself. He also presented the president with Al-Dostour Party’s vision,” said presidential spokesperson Yasser Ali.

Ali would not elaborate as to which constitutional articles in particular ElBaradei spoke to Morsy about.

“This comes as part of the series of meetings President Morsy is having with leaders of national and political forces in an attempt to achieve constitutional stability in the country,” added Ali.

Morsy has previously met with presidential candidates Hamdeen Sabahi, Abdel Moniem Aboul Fotouh and Amr Moussa. His meeting with ElBaradei was postponed due to the latter having other engagements at the time.

The Nobel laureate is an outspoken opponent of the Constituent Assembly tasked with drafting the new constitution, long maintaining it that it is unrepresentative of the Egyptian people.

He issued a statement in September in collaboration with third placed presidential runner up Hamdeen Sabahi, and various other groups and parties, calling for a boycott of the assembly and urging its secular and liberal members to resign.

Al-Dostour Secretary General Emad Abu Ghazi released a statement prior to the meeting, saying that ElBaradei’s comments about former members of the disbanded National Democratic Party at an Aswan rally had been misinterpreted.

ElBaradei said that the defunct party, led by former President Hosni Mubarak, had three million members and that it was impossible that they were all corrupt, calling for national reconciliation.

Abu Ghazi said the comment was being widely interpreted to suggest in that ElBaradei was for an alliance with remnants of the former regime, but really he only meant those not involved in corruption or wrong doing.

He added that some people were “misguided” in joining the party but not corrupt, and that a national reconciliation process like that of post-Apartheid South Africa was needed.

Abu Ghazi denied that party Deputy Chairman Ahmed El-Borai or any other Al-Dostour officials were meeting with former National Democratic Party members to discuss electoral alliances, or anything at all.