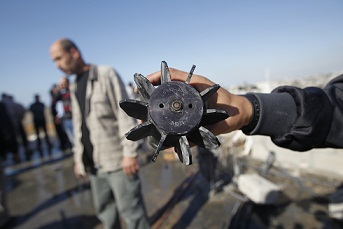 Israel is considering possible operations into Gaza to impose stability on the besieged Palestinian enclave.

Israeli Defence Minister Ehud Barak said on Tuesday that Israel will not allow the continued threat to its citizens and that it is studying the options it can take to put the threats to an end. Rockets attacks on southern Israel, by armed groups including the Islamic Resistance Movement, commonly referred to as Hamas, have disrupted the lives of around one million Israelis recently.

According to an Israeli Defense Forces’ (IDF) spokesperson, over 120 rockets have been fired in the past three days. Early on Tuesday morning Israel reacted with an operation to target three military sites in Gaza, Reuters reported. So far the violence has left seven Palestinians dead and four Israelis injured.

Israeli officials told Israeli TV that they may target bureaus of politicians in Gaza and headquarters of political groups, or resort to assassinations and destruction of private property in retaliation, Egyptian state-run news agency MENA reported. The officials added that if these methods fail, it may launch a major operation like the one launched in December 2008.

Saeed Okasha, an expert on Israeli affairs in the Ahram Centre for Political and Strategic Studies said that the possibility of a major operation like the one launched in 2008 which left over 1,000 Palestinians dead is unlikely. “The level of threat that the people of Sderot [Southen Israel] are facing hasn’t reached the point that makes Israel launch such an operation,” Okasha said.

The Freedom and Justice Party, political wing of the Muslim Brotherhood, said in a statement Tuesday that the operations against the Gaza Strip and Golan Heights were related to the upcoming January elections in Israel.

Okasha however said he didn’t believe the violence is part of an election campaign, instead suggesting that Israel does have an interest “showing that the Muslim Brotherhood [through its affiliation with Hamas] is threatening the security of Israel and that Morsy is not doing his job.”

Hamas has the largest interest in the recent violence, according to Okasha, after reports emerged that they were negotiating with Israel. “Hamas is trying to prove that it is still on the path of resistance,” he said.

Earlier this month, Palestinian Authority officials said that they possessed information on talks between Hamas and other Arab groups with Israel, according to Ynet news service.

Furthermore, international attention may benefit Hamas if it can focus it on the siege Gaza has been under, enforced by Egypt and Israel since 2007.

Last month, 72 hours of similar violence took place, until an unofficial ceasefire was brokered by Egypt.