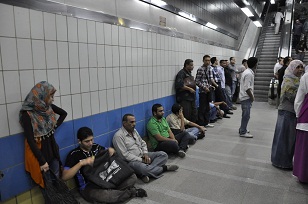 The Cairo Metro has confirmed that it expects its workers to close down its two lines on Wednesday.

The threats to stop operation of the metro represent the most recent development in an ongoing protest. After workers staged peaceful protests at the stops of Damerdash, Shubra, and Al-Marg, the demonstrators plan to move their sit-in to Al-Shohada station, formerly named “Mubarak,” on Ramsis Street.

Cairo’s two main lines intersect at this station, enabling the group to completely halt the movement of trains to all of the network’s stations.

The Egyptian Company for Metro Management and Operation has attempted to negotiate with workers and come to a settlement to avoid the strike, but has not been successful. A representative from the company said it had taken steps to request the government to provide security on Wednesday.

The workers have demanded the resignation of Ali Hussein, the chairman of the Board of Directors. The protesters also demand health care provisions and the repair and maintenance of a number of stations that lack adequate upkeep.

A closure of the Cairo Metro would add to the already notorious street traffic that residents of the city continue to suffer from.