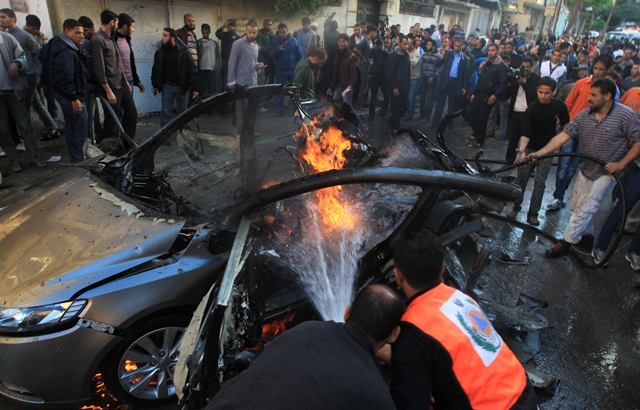 GAZA CITY, Palestinian Territories — Israel killed a top Hamas military commander in a targeted strike in Gaza on Wednesday, prompting outrage from militants who said the Jewish state had opened “the gates of hell.”And Egypt promptly announced it was recalling its ambassador over Israel’s hit on a car in Gaza City that killed Ahmed Jaabari and his bodyguard, which was swiftly followed by more than 20 air strikes that killed another five people and injured 60.Israel warned this was only the start of an operation targeting militant groups in Gaza, which comes as the Jewish state prepares for general elections in January.

“Today we sent a clear message to Hamas and other terrorist organisations,” Israeli Prime Minister Benjamin Netanyahu said during a televised address several hours after the initial strike at around 1400 GMT.

“If it becomes necessary, we are prepared to expand the operation,” the premier warned after meeting with his security cabinet. “We will not tolerate a situation in which Israeli citizens are threatened by rocket fire.”Defence Minister Ehud Barak said the operation was aimed at strengthening Israel’s deterrence, damaging militant groups’ rocket-firing capabilities and stamping out attacks on southern Israel.”Israel doesn’t want a war but the Hamas provocation of recent weeks… forced us to act sharply and decisively,” Barak said.

“We are at the beginning, not end of this action,” he warned. “It won’t be a quick fix.”

The strikes capped five days of rising tension in and around Gaza, which saw Israel killing seven Palestinians and militants firing more than 120 rockets over the border, injuring eight.

Jaabari’s death sparked furious protests in Gaza City, with hundreds of members of Hamas and its armed wing, the Ezzedine al-Qassam Brigades, chanting for revenge in and around Shifa hospital where Jaabari’s body was taken.

The Israeli army said it had targeted “a significant number of long-range rocket sites” and was prepared to launch a ground operation if necessary in order to stamp out rocket fire.

“All options are on the table. If necessary, the IDF (army) is ready to initiate a ground operation in Gaza,” the military said on its official Twitter account.

Police said at least 29 rockets had hit southern Israel in the aftermath of the strike and that the level of alert had been raised across the area.

Following a request from Morsi, Arab League chief Nabil al-Arabi said the organisation was preparing to hold an emergency meeting over the violence.

Britain also urged restraint and Russia said it was “very concerned” about the escalation, while Washington said it was watching developments in Gaza “closely.”

Israeli army spokeswoman Avital Leibovich said the operation, code named “Pillar of Defence,” had only just begun with the air force hitting “close to 20 targets” used for launching rockets — especially those with a range of 40 kilometres (25 miles) — and causing “significant damage.”

The strike prompted an outpouring of grief and anger, with armed men firing weapons into the air outside Shifa hospital in Gaza City, and mosques throughout the city calling prayers to mourn the commander’s death.

The Qassam Brigades issued a furious communique, saying Israel had “opened the gates of hell on itself,” and Hamas spokesman Fawzi Barhum said the strike was tantamount to a “declaration of war.”

“The occupation committed a dangerous crime and crossed all the red lines, which is considered a declaration of war,” he said in a statement.

“The occupation will pay dearly for this and we will make it regret the moment they thought about it.”

Israel’s last major operation in Gaza began at the end of December 2008, just six weeks shy of general elections. Troops embarked on a 22-day campaign which led to the deaths of 1,400 Palestinians — half of them civilians — and 13 Israelis, 10 of them soldiers.