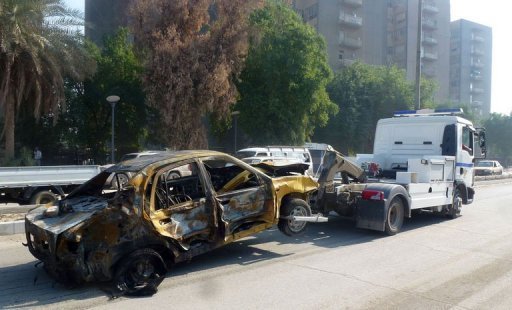 Kirkuk, (AFP) – A spate of apparently coordinated attacks across Iraq on the eve of a festival marking the Islamic new year killed 19 people and wounded more than 150 others on Wednesday, officials said.

The 13 bombings and shootings struck in Baghdad and nine other cities, the security and medical officials said, and will likely raise tensions in a country mired in political deadlock and only relatively recently emerged from a brutal sectarian war.

No group immediately claimed responsibility for the violence, but Al-Qaeda’s front group in Iraq frequently carries out coordinated bombings and attempts mass-casualty attacks in a bid to destabilise the government through fomenting bloodshed.

Two car bombs and a roadside blast in Kirkuk’s eponymous capital killed five people and wounded 34 others, while another explosives-packed vehicle targeting an army patrol in the town of Hawijah, also in Kirkuk province, left four dead and five others wounded, officials said.

“My child was killed! His friends were killed!” Shukriyah Rauf screamed in Kurdish at the site of the worst of the Kirkuk city attacks, where a car bomb and a roadside explosion in a majority-Kurdish neighbourhood killed five.

There is no security here, our homes were destroyed!””

The attack that killed Rauf’s child struck near offices of the Kurdistan Democratic Party, Iraq’s most powerful Kurdish political party which is led by Massud Barzani, president of the autonomous Kurdistan region.

Nearby buildings and vehicles were badly damaged, with shrapnel, garbage, and bloodstains on the street.

Another attack in the city wounded seven street cleaners.

”The car bomb targeted our friends, they are not police, soldiers or politicians,” wailed Jassim Al-Obeidi, a cleaner who escaped unscathed. “They just wanted to make a little money.”

Kirkuk province lies at the centre of a tract of territory claimed by both the central government and the Kurdish region, and the unresolved row is cited by diplomats and officials as the biggest long-term threat to Iraq’s stability.

South of Baghdad near the city of Hilla, meanwhile, a car bomb in a parking lot near a crowded marketplace killed five people and wounded 77 others, officials said.

Also south of the capital, in the town of Hafriyah, another car bomb left four dead and 15 wounded, while a car bomb near Baghdad’s Firdos Square, the site famous for Iraqis pulling down a statue of Saddam Hussein shortly after the 2003 US-led invasion, killed one person and wounded six others.

The latter blast, which struck near two of Baghdad’s biggest hotels, shattered nearby shop windows and damaged buildings. Security forces barred journalists from taking photographs or filming the scene.

Four more bombings and two shootings in the restive provinces of Diyala and Salaheddin, both north of Baghdad, wounded 22 others.

The attacks come a day before Muharram, which marks the Islamic new year on the lunar calendar.

Violence in Iraq is dramatically lower than its peak in 2006 and 2007 when the country was in the throes of a brutal sectarian war, but Sunni militants still carry out attacks, typically in a bid to target the Shi’a-led government, its institutions and supporters.