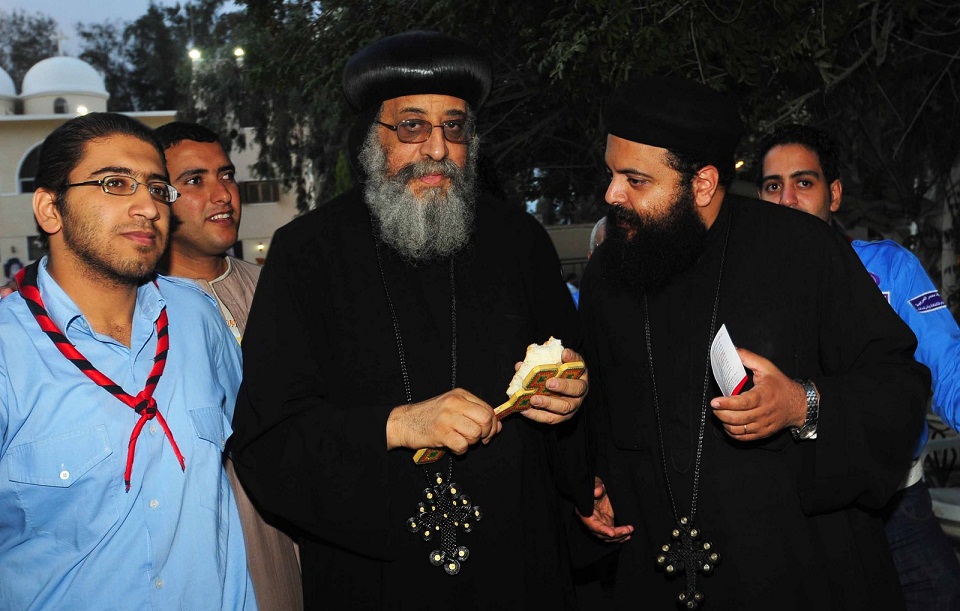 Pope Tawadros II will be enthroned at Saint Mark’s Cathedral on Sunday 18 November in a ceremony that was last carried out on 14 November 1971. Bishop Pachomious, the Metropolitan of Beheira and acting head of the church, will preside over the enthronement ceremony.

Tawadros will enter the cathedral using a large ceremonial key, symbolising the pope’s new responsibilities and leadership role, and enter with metropolitans, bishops, and all members of the Holy Synod behind him.

During the service, Tawadros will put on his new white tonia, the white vestment worn by deacons and clergy members during liturgical services, and the accompanying golden sedra, depicting the twelve disciples of Jesus, as the Coptic Orthodox Church often refers to its pope as the “thirteenth disciple.” He will also wear the papal crown for the first time and sit on the throne in the cathedral.

At the conclusion of the liturgy, the newly enthroned pope will fast for an entire year, except for the Church’s major feasts.

The pope stands as the highest authority within the Coptic Orthodox Church and is considered the “first among equals” in the Holy Synod, the group responsible for ruling on matters of faith.

The pope stands as the most prominent voice within the church, is responsible for overseeing the ordination of clergy, and supervises the expansion of the church.

Biography of the 118th Pope

Pope Tawadros II was born Wagih Sobhy Bakky Suleiman on 4 November 1952 in Mansoura. His father was an irrigation engineer and his family moved around during his childhood from Mansoura to Sohag and then to Damanhour.

He received his bachelors degree in pharmacy in 1975 from Alexandria University and earned a fellowship in world health in England in 1985. Between obtaining his two degrees he began studying at the seminary in 1981, the same year Pope Shenouda III was banished by President Anwar Al-Sadat. Tawadros converted to monasticism in 1988 and was ordained a priest two years later.

He was ordained Bishop Tawadros, General Bishop of Beheira, by Shenouda in 1997. As bishop, he gained a reputation for his ability to explain complex theological topics and his work with the youth. He enjoys a close relationship with the Metropolitan of Beheira, Bishop Pachomious, locum tenens of the Coptic Church between Shenouda’s death and Tawadros’ selection.

Tawadros has expressed his belief that the church’s role should be pastoral and service-oriented, and not as a political actor. In an interview with Bishop Paul of Tanta, Tawadros stressed the importance of reintegrating large segments of the Coptic youth back into mainstream society after many had isolated themselves within church communities.

Tawadros enjoys a close relationship with acting head of the church Metropolitan Pachomious and both oversee the same diocese of Beheira. Pachomious has drawn overwhelming approval during his tenure as locum tenens. Many think his relationship with Tawadros will have a positive lasting effect on the papacy, “He is a student of [Bishop] Pachomious,” said Emad Gad, a political analyst at Al-Ahram Center for Political and Strategic Studies and member of the Egyptian Social Democratic Party. “We think that he will be a wise man, he will be moderate, and he will try to work towards an Egyptian agenda. He will try to renew the role of the church and concentrate on the spiritual, not political aspects.”