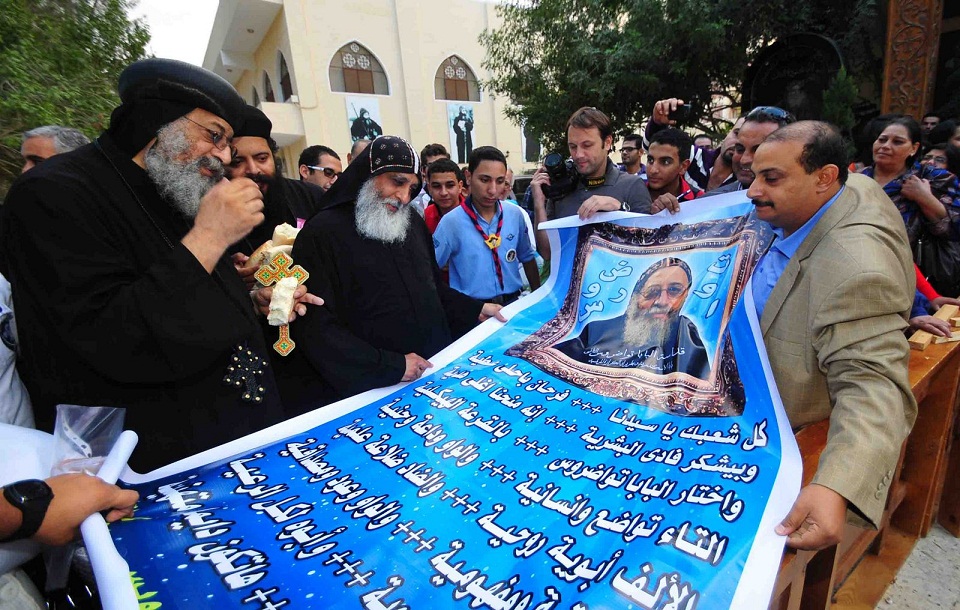 About 120 km northwest of Cairo in St. Bishoy Monastery, hundreds of Copts queue impatiently waiting to receive the blessing of the newly-selected Pope Tawadros II. The large dining hall in front of his office suddenly fills with laughter and ululations as a white-gold official papal outfit is carried in to the waiting pope-elect.

On simple chairs placed in the open garden of the monastery, the Daily News Egypt meets with Egypt’s new Coptic pope to explore his plans for the church. The patriarch of the largest Christian community in the region comments on Christian divorce, marriage and inheritance. He responds diplomatically to questions on Morsy, his cabinet and party.

Pope Tawadros, what do you think are the most pressing issues for the Coptic community that you plan to tackle?

First, I would like to welcome you to St. Bishoy Monastery. I believe there are no pressing issues, since we have a [stable] church. After only a single week; six days exactly, following the decease of His Holiness, [the late Pope Shenouda III]; the acting head of church, Bishop Pachomious, “Qaimmaqam” took charge. He continued along the same [stable] line. Procedures were followed smoothly until the election and enthronement of the new pope. While there is nothing that could be described as urgent, there exist some administrative arrangements, and other arrangements with respect to the secretariat.

One of the most crucial issues for Christians in Egypt, is the Unified Law on Houses of Worship, and church construction law, which restricts the construction and maintenance of churches. Will the church, under your leadership, intervene in such matters?

This matter belongs to the state and not the church. This particular issue has caused several crises over the years. The problem of constructing churches comes up so often, as it’s a matter of the right to freedom of worship; one of the primary rights afforded by the United Nations Declaration on Human Rights. It will be extremely dangerous when Copts are not granted their right to freedom of worship in Egypt. The problem [Copts face when building churches] occurs, time and time again, and is not met with a decisive and powerful response by the state. We have been hearing about the Law on Houses of Worship, and about the regulation of church construction. However, until this day we have seen nothing [from the government].

Some personal affairs, such as marriage and divorce, have been controversial topics in Coptic society. How would you comment on this?

First, marriage should be built upon modern and rational concepts. Secondly, there are two important terms; talaq and tatliq. These are legal terms. Talaq, or divorce in Christianity, can only be enforced in case of adultery, either by action or thought. When such sin happens, the sinful party is denied the church’s permission to remarry. The other party is free to remarry. The church does not grant the sinful party permission to remarry since he has not been faithful in the first marriage. He was enjoying a correct marital life, and proved to be dishonest; how come then would he be entrusted with another marriage? Someone, and forgive my figurative sense, works in a bank and steals, can we still employ him in the bank?

Regarding tatliq, it is an entirely different matter. It is a case where a marriage was erroneously initiated without our knowledge. Reasons might be physical or psychological illness, or several other things. In such an event, both parties file a complaint with the church, namely the Clerical Council. The complaint is then studied, in the case that the plaintiffs are right, they acquire what is termed as voidable marriage, meaning it is as if the marriage had not taken place. Imagine we built a three storey building, before discovering that the foundations are unsuitable, what can we do? Do we allow people to move in?

Many Copts, especially women, complain their right to inheritance is subject to Islamic Shari’a. What’s your view on this?

In this issue Islamic Shari’a is enforced, meaning that the male receives twice the female’s share [of inheritance]. Most Christian families apply these rules in accordance with the Shari’a law, through the courts. [But they manage to] amicably settle their inheritance matters [among themselves]. In the end it is the Islamic inheritance law that is being applied.

Your papacy comes at a time when there are many more Copts living abroad than when your predecessor was enthroned. With regards to expatriate Copts, do you intend to conduct visits abroad? Many more Copts have emigrated since the revolution.

And you don’t know why?

Are you referring to their fear of the Muslim Brothers?

But what is your opinion?

Naturally. When a certain society frightens and expels its offspring, mankind, the most precious thing on Egyptian soil; such a society is losing [out].

Will the church work on calling on the recent emigrants to return?

I first want to tell you something. Why do we call them “expatriate Copts” rather than “Christians” or “Egyptians”? At the start, they are Egyptians who decided to migrate. Had they been Muslim or Copts, they are first and last, Egyptians. Egyptians present in any country in the world, are considered a continuum of Egypt. In other words, Egypt is represented in European society through Egyptians, and is also represented in American society through Egyptians. There are Copts, yes. We consider a church to be a popular embassy of Egypt. An embassy that serves Egypt, and that regulates the life of Egyptian expats. Of course in due time I will be visiting our churches as part of my duties.

You are known as being one of the disciples of Bishop Pachomious, and one of the closest people to Pope Shenouda III. Will you continue on the same path, or direct the course of the Egyptian church in a different direction?

The path adopted by Pope Shenouda is a moderate one. The same is true for the path followed by Bishop Pachomious. I am generally leaning towards being moderate.  Extremism towards either the right or the left is not acceptable. We as Egyptians, have the Nile river crossing the middle of our land, we were all taught this in geography. This Nile river flowing in the middle teaches us to be moderate.

What do you expect of the relationship between the Egyptian church and the presidency under Muslim Brotherhood rule?

Our hearts are open to anyone. My heart is open to everyone, and this is true for my fathers and brothers among the bishops and priests. We do not close our doors or hearts in the face of any human being.

What is the expected relationship between your institution and the Muslim Brotherhood?

Relations full of respect, love, compassion, and peace. Two days ago we had a visit from the representatives of the Freedom and Justice Party (FJP) in Wadi Al-Natrun, where the monastery is located. They asked me what I would wish for from the FJP. I replied that I request two things from the FJP; freedom and justice, only.

Have you taken any decisions with regards to amending the patriarchal elections law?

Yes, and this is considered the first decision I made. It is true that I have not yet practised my regular work, and have not yet travelled to Cairo, but this was my first decision. We have formed a committee comprising of members of the electoral organising committee. The number of the committee was 18, half of whom are bishops and priests, the other half consists of legal experts and consultants. I requested from the committee to prepare a draft of a new patriarchal elections law, to be presented to a church discussion panel, prior to being presented to the responsible authorities.

Is increasing the number of candidates among the suggested amendments?

The amendments include increasing the number of candidates, the expansion of the definition of diocese, which are geographical domains assigned to every bishop. The amendments also mention our churches abroad. I want to tell you that when the law was brought in, in 1957, the number of bishops was thirteen. Today, the number of bishop is almost 100. If, among the thirteen bishops in the old law, we take nine to represent the committee, how many will we choose from the current hundred? These are parts of the amendments.

Many Islamists are been calling for the complete implementation of Islamic Shari’a. What will be the church’s response if this actually happens?

Naturally, Shari’a is a religious matter, isn’t it? It is applied on man in his relationship with God. It is not then a social order that can be implemented on any person. If this happens [implementation of Shari’a law], we have many responses and many ideas. I expect the society to respect everyone belonging to it; Egyptians, Muslims and Christians. If my Muslim brother would hurt my feelings, being his brother sharing the same homeland, what else is left? This is the responsibility of the Muslim majority of Egypt.

How do you comment on the draft constitution? And do you foresee that the constitution will be issued in this current form?

The constitution should remain under the umbrella of citizenship. The common factor that brings us on Egyptian soil is that you are a citizen, and I am a citizen, both holding Egyptian citizenship. You are Muslim, I completely respect you, and I am Christian, you completely respect me. You have your own worshipping methods and personal or family traditions, this is totally respected. It cannot happen that I focus on a marginal section [of society] and take it as a general case. The draft constitution discussed numerous matters. Some are on the side of the extreme right, while others are maintaining the extreme left. Meanwhile, the moderate voice is gradually diminishing.

What would be your solution be to the current polarised political climate?

The solution lies in being clear with ourselves. The truth is that the formation of the Constituent Assembly is not the solution. The current formation does represent all Egyptians justly.

What is your opinion regarding the place of Copts in the cabinet, in light of the promises made by President Mohamed Morsy?

You are touching on difficult issues. I do not care about how many ministers are Christians or Muslims. What I care about is [having] a cabinet of ministers of an acceptable caliber. I look to the efficiency of the responsible person, whether president, minister, or manager, and not to his religious affiliation.

The youth are like a golden link in a chain[Egyptian saying]. Pope Shenouda had a very nice saying, “youth without church, youth without future.”

In the decades preceding the revolution, there was a pressure being exerted on Copts, and there was marginalisation and a compulsion to step away from everything.

Following the revolution, the fear barrier was broken, and the gates of freedom have become wide open before the youth. In the old days, whenever there was a problem, the youth used to demonstrate in the cathedral. Now there are good movements. Some have become accustomed to demonstrating in front of parliament, the cabinet, and the surrounding streets.

Today’s youth, on the global level, demand dialogue, outreach and communication. They cannot accept things as they are. This logic does not work with them anymore. I want to give you a little idea. Previously, people were brought up through the family, the school, the church, and the mosque. Today, upbringing is performed by three elements, the TV, the computer with the internet and all of the social media websites, and third, the mobile phone. Three screens are the ones bringing up our youth. As such, today’s youth are facing a great deal of disturbance. They need to be spiritually filled, and to engage in a spiritual relationship with God. They need to fill their hearts as they fill their brains. The church will support the youth spiritually.