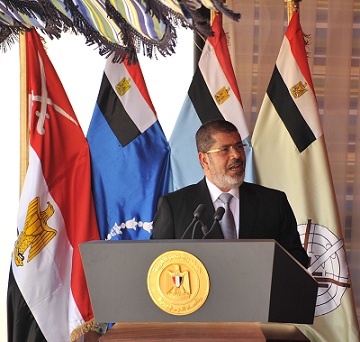 The foreign minister of Saudi Arabia sat down with President Mohamed Morsy on Tuesday in Cairo. Presidential spokesperson, Yasser Aly, said that the two discussed bilateral relations and the “efforts of the Quartet to resolve the issue of Syria.”

The Quartet is an approach to Syria proposed by Morsy that would see regional powers Egypt, Turkey, Iran, and Saudi Arabia work together to resolve the country’s civil war. However, it has seen little progress. The Quartet was part of Tuesday’s discussions and  Saudi Arabia was notably recently a no-show at a meeting of the Quartet’s foreign ministers.

Walid Kazziha is a professor of political science at the American University of Cairo, with a focus on Egypt and the Gulf region. He said there are two major issues that were likely discussed in the meeting between Morsy and Saudi Foreign Minister Prince Saud Al-Faisal.

“One is Egypt’s need for Saudi investments, as well as grants and loans from Saudi Arabia, which is the economic side. The other has to do more with the region, the situation in Syria, the two countries seem to see eye-to-eye in regards to the Syrian regime.”

Egypt is heavily involved economically with Saudi Arabia, with remittances of Egyptian workers playing a significant role in GDP. The Saudi crown has also bestowed over a million dollars in aid and loans for Morsy’s Egypt, a source of revenue that is made even more important in light of the recent inability of US President Barack Obama to get scheduled aid money though the American congress. Saudi Arabia was the destination of Morsy’s first trip abroad after assuming the presidency.

“The Saudis have been very nervous about change in Egypt since 2011,” said Kazziha. “There is no doubt that that stable relationship with [former president Hosni] Mubarak, which Mubarak provided for a very long time, has been shaken.”

Morsy has made a concentrated effort to reassure the Saudi royalty that they have an ally in him. Tuesday’s meeting was another step in what appears to be a successful campaign to do so, said Kazziha.

“As far as the Muslim Brothers are concerned, they would like to restabilise the relationship, but there will be outstanding problems still,” added Kazziha. “Some of these problems may have to do with the Egyptian stance toward Hamas.” The Palestinian issue has been thrust into the forefront of Arab politics recently because Mahmoud Abbas, a rival of Hamas, has been on a regional tour to shore up support for his UN bid for non-state member status.

“The Saudi’s are a bit alienated by the rapport between Egypt and Hamas,” said Kazziha. “The Saudis would like to have more influence over the Palestinian situation and would rather not have Egypt come in this late in the process.”

In addition to diplomatic tension, there are also issues with Egyptians being mistreated in Saudi Arabia that cause public anger in Egypt. Recently the treatment of Najla Wafa, an Egyptian woman was whipped as punishment for a dispute with a Saudi princess, and Egyptian prisoners in Saudi jails, most notably lawyer Ahmed Al-Gizawy, has led to anti-Saudi protests in Cairo.

“These issues come up and cause popular enmity,” acknowledged Kazziha. “In the past, Mubarak simply glossed over them and didn’t mention anything. I think Morsy needs to show at least that Egypt is willing to defend its own citizens in places like Saudi Arabia.”

Ultimately, said Kazziha, the result of the evolving Egyptian-Saudi relationship will go a long way to shape the future leadership of the Arab world. For now Saudi Arabia is seen to have the upper hand because of the freedom in foreign affairs their government gains from total dominance over domestic issues, in addition to the ongoing turmoil that has caused the Egyptian government to look inward.