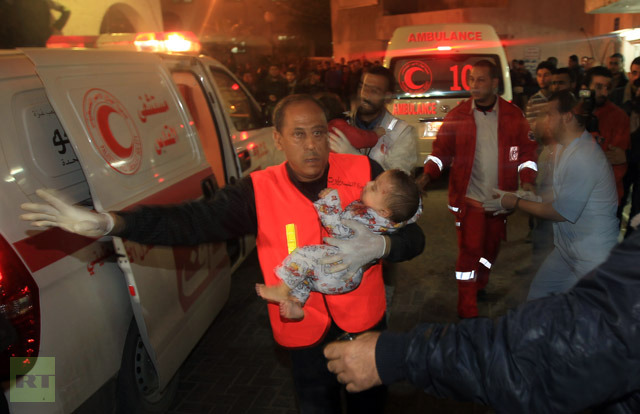 By Sara Hussein – AFP –  The usual cacophony of Gaza’s streets has been replaced by an eerie quiet, broken only by the whoosh of rockets, the crash of air strikes and screeching ambulances taking the wounded to hospital.

Since an Israeli air strike killed a top Hamas commander in Gaza City on Wednesday afternoon, marking the start of a massive aerial bombing campaign, the city’s residents have largely taken refuge at home.

Streets that are normally clogged by trucks and cars, competing for space and raising clouds of dust and noise, are virtually empty. And with schools throughout Gaza closed, the usual crowds of undersized children struggling with oversized backpacks are nowhere to be seen.

Instead, the only crowds are those gathered in mosques mourning the dead, or queuing outside bakeries to stock up on bread.

“I circled around for two hours, looking for a place with the shortest line,” said Momen Ahmed, 24, standing outside the Abu Dayya bakery with his friends. “To be honest, there’s no food crisis, and the interior ministry went on television to say there’s more than enough food, that we have plenty. But we think it’s better not to take the chance.”

The confrontation also sparked fears of a fuel crisis, with residents reporting petrol shortages throughout the city. As Momen waits, the crashing boom of a new air strike fills the air, followed shortly afterwards by the higher-pitched swoosh that indicates outgoing rocket fire.

A few hundreds metres (yards) away is Gaza’s Shifa hospital, where dozens of young men mill around, watching wide-eyed as ambulances and cars deliver the wounded.

Shortly after a round of strikes in the eastern Zeitun neighbourhood, the injured begin to arrive.

First is a man in a blue tracksuit, lying crumpled and barefoot on a stretcher as he screams and weeps. The triage group, one of three working at the hospital front, examines him in vain for injuries. “It’s psychological. He’s simply completely traumatised,” says Ihab Shirir, an orthopaedic specialist.

Shortly afterwards, eight-year-old Sujud Nasser is brought in by her uncle. Her pink flip-flops, a plastic flower atop each foot, are splattered with blood and she looks out from under a head bandage at the doctor assessing her injuries. “What happened, sweetheart, where does it hurt?” he asks.

She hesitates, trembling as she responds. “There was a strike, the house collapsed, the wall. The stone fell on me and hit my head,” she says, pointing to the bandage, which covers a deep wound across her forehead.

The doctors assess the patients as quickly as possible, trying to clear the few beds in the triage room before the next wave arrives. An ambulance brings in a woman in niqab, Lubna Dalul, who was also caught beneath the wall of her home after the air strike. She is six months pregnant and terrified about whether her baby has been hurt. Behind her is another child, a six-year-old who is sobbing uncontrollably. Her uncle raises the hem of her trousers to show where shrapnel carved a bloody gash diagonally along her ankle and foot.

Dr Shirir is pragmatic about the flow of wounded, saying it is nothing like the scenes he witnessed during Israel’s massive 22-day Cast Lead Operation over New Year 2009 which claimed the lives of 1,400 Palestinians, half of them civilians and 13 Israelis, 10 of them soldiers. “The situation now is bad, but so far, it’s not as bad as Cast Lead,” he says. “But we fear, we believe, that the worst is yet to come.