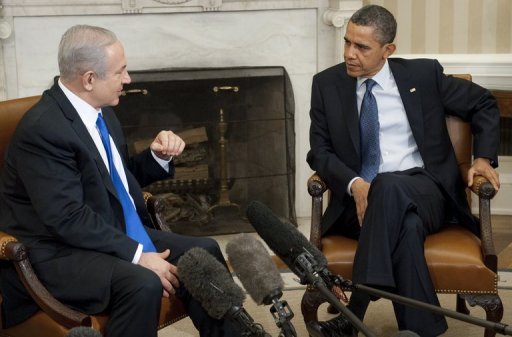 “We’ve been closely coordinating and communicating with the United States government,” Michael Oren told CNN at about 2230 GMT, saying Netanyahu spoke with Obama “about an hour” before.

The US National Security Council confirmed the call.

The Israeli ambassador accused militant groups in Gaza of “perpetrating a double war crime. They shoot at our civilians to kill our civilians and they use their own civilians as a human shield.”

“They want their own civilians to get killed. We are trying our utmost to avoid inflicting civilian casualties,” Oren said. “We’re doing our best. But at the end of the day, this is an enemy that wants its own civilians killed.”

Hamas said at least eight Palestinians were killed in more than 20 Israeli air strikes on Gaza as the Jewish state began an operation targeting militant groups.

Ahmed Jaabari, the operational commander of Hamas’s armed wing, the Ezzedine al-Qassam Brigades, was killed along with his bodyguard in an initial Israeli strike on a car in Gaza City, the Islamist movement said.

The Palestinian envoy to the United Nations put the death toll at nine and said the number would likely rise.