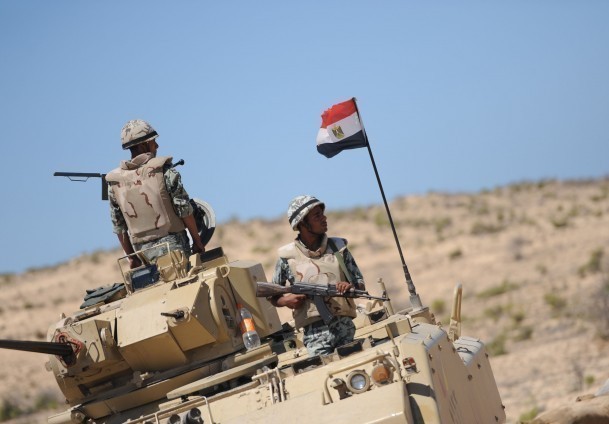 Sinai has been placed on a heightened security alert following Israel’s operation in the Gaza Strip. Egyptian forces have been seen patrolling 13.5km from the Israeli and the Gazan border, having secured many of the tunnels into Gaza. Witnesses in the border town of Rafah said they had seen Israeli warplanes and reconnaissance drones flying within the town’s airspace. Explosions in Gaza were clearly heard in Rafah.

Local authorities in North Sinai have been ordered to open the Rafah crossing for the benefit of any injured by the Israeli air raids and have organised tens of ambulances to be prepared at the crossing, placing the Arish Central Hospital on alert to receive the wounded. Medical aid to the crossing may also be a possibility.

Security personnel in North Sinai are reportedly on standby for further orders related to the deteriorating situation in the Gaza Strip.

Military patrols and police are reported to be out in force on the main roads in Northern Sinai, including the roads that connect Arish, Rafah and Sheikh Zueweid.

Security sources said that additional forces were moved from their base in the Ismailia Governorate early on Thursday. A source said this was in order to tackle any emergency that the region may be exposed to during the Israeli offensive.

The border guard commander reportedly increased security along the border, in the event of any aggression aimed at the Egyptian border.

The situation in North Sinai was relatively stable until an attack in August on an Egyptian checkpoint in Rafah left 16 Egyptian soldiers dead. The attack was carried out by armed men who tried to flee across the border. President Mohamed Morsy ordered all illegal tunnels between Gaza and Egypt be shut down and launched an offensive in the Sinai Peninsula to tackle the security threat.

The attack managed to sour relations between Egypt and Hamas, who had been working on lifting Egypt’s part of the Gaza blockade, imposed by Israel. Prior to the attack discussions on lifting crossing quotas and shipment of goods were underway.