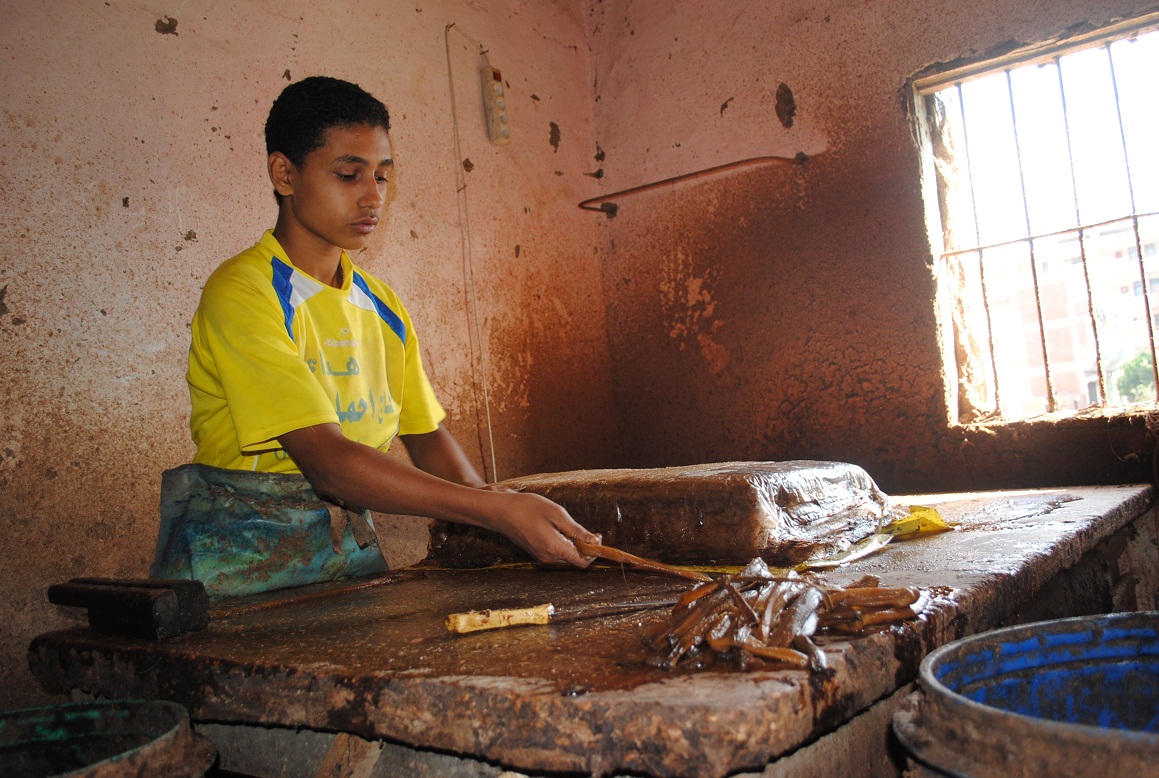 Fifty years ago, tourists in Egypt could not find the papyrus sold at bazaars and by vendors at archaeological sites in Giza or Luxor like they can today.

The ancient craft of papyrus making had become extinct, until, in the 1970s it was resurrected by the Egyptian artist Anas Mustafa. He started growing papyrus in his home village Qaramos, in the Sharqiya governorate and when, later on, papyrus growing proved to be profitable, the whole village followed his example and became the centre of papyrus production in Egypt.

Mustafa taught his fellow villagers not only how to grow papyrus, he also shared with them the knowledge how to transform the plants into the ancient paper. Initially he trained 200 villagers, who, when they found how commercially viable growing the crop is, taught the rest of the village.

Papyrus cultivation takes only two or three months. “It is very simple,” said Mohamed Zoghny, papyrus farmer and trader. “The plants do not need any special chemicals or fertilisers; all it takes is water. Besides the ease of cultivation, papyrus is also not a seasonal crop; it can be grown year round.”

Every house in Qaramos is a papyrus workshop and most of the village inhabitants are engaged in the business. Zoghny said that 90 per cent of the village’s agricultural land is planted with the crop and even the surrounding villages have abandoned other crops and have started to grow it too.

Zoghny inherited his profession from his father and grandfather and the whole household takes part in the papyrus production cycle, including his wife and sons. Together the family can produce up to 1,000 sheets per week.

Production in Qaramos follows the same procedures that were invented by the ancient Egyptians thousands of years ago. After the papyrus is harvested the stems are cut in pieces, peeled and left in a barrel with caustic soda for four or five hours to soften. Then the wet papyrus is flatted with the same primitive tools used since pharaonic times, and pasted together to form a sheet. These sheets are then wrapped in rags, pressed in an iron press and finally placed on cardboard squares and left in the sun to dry.

Once the papyrus sheets are dry they move on to the print shops. There are six print shops in Qaramos, and Wagdy, a print shop owner, said he had been working in papyrus printing since he was seven years old. The most common printing method in Qaramos is silkscreening.

lain papyrus sheets are stamped with a design and colour when paint is pushed through a screen that holds the design. A papyrus sheet can go through this process three or four times before all the colours are completed in the design, since the silkscreen machine in Wagdy’s print shop can only process one colour at a time.

Tourists are the main consumers of papyrus and “designs vary according to tourists’ demands,” said Wagdy. Wagdy sells his finished papyrus sheets to bazaars in Aswan, Hurghada, Khan El-Khalili in Cairo and many other places. He said that the designs popular in Luxor and Aswan differ from the ones that sell well in Hurghada and Sharm El-Sheikh; in Luxor pharaonic designs depicting the Luxor Temple or Tutankhamen’s mask are in high demand, while in Hurghada designs depicting landscapes are more popular.

Wagdy’s print shop can produce 5,000 sheets a week, he buys the plain sheets from farmers for a pound but by the time he sells them to souvenir shops, his mark-up is four or five times that.

Both Zoghny and Wagdy agreed that Tourism has great influence on the papyrus business. “A tour bus crash in Luxor or tourists being kidnapped in Sinai can affect the whole papyrus production chain,” said Zoghny.

During the 25 January Revolution tourism activity in Egypt practically came to a stop and papyrus prices dropped. Only 20 per cent of the harvest was sold and farmers burned the rest.

The villagers of Qaramos can only hope that the security situation and political stability will improve and that tourism will recover so that their papyrus business can thrive and flourish as before.