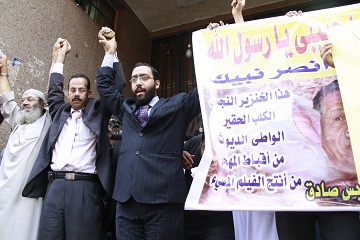 A decision over a request filed by Ahmed (Abu Islam) Abdallah to change the panel of judges handling his case has been postponed until 16 December.

Supporters of Abu Islam gathered at High Court Building Saturday in a show of solidarity with the Salafi preacher.

Abu Islam, founder of Umma Islamic TV channel, his son Islam (Abu Yousef) Abdallah, and Hany Gad Allah, a news reporter, were charged following an incident in front of the US embassy in Cairo with contempt of Christianity and burning the Bible.

“We have submitted 10 requests to court, all were turned down by the judge handling our case,” Abu Yousef said, explaining why he and his father have requested changing the panel of judges. “Some of the overlooked requests, if considered, could dissolve the case and have us acquitted.”

Among the requests the father and son filed to the judge was one involving the summoning of a committee from the Coptic Church to state whether or not the copy of the Bible that was burned is recognised by the church as the genuine Bible, Abu Yousef said. The lawyer who filed the report against Abu Islam and Abu Yousef reportedly belongs to the Coptic Church.

“As long as the burnt bible is not [the one recognised by the Coptic Church], I can’t be punished for burning it,” Abu Yousef claimed, adding that the copy of the Bible he burned is only recognised by the Dove World Outreach Center, the Florida church of notorious Quran burner Pastor Terry Jones.

“We also requested summoning a committee from Al-Azhar to judge whether the copy we burned is the one recognised by Islam as the genuine Bible, according to the Quran,” Abu Yousef said. This request, as well as the previous one, was disregarded.

“If all those requests have been overlooked, then on what basis am I being tried?” Abu Yousef asked.

Abu Yousef denies any wrong-doing, stating that the book he and his father burned was not holy as there is only one holy book; the Quran.

“What we did doesn’t breach United States law,” Abu Yousef said, adding that the US allows “the burning of the Quran and using it as a doormat in bathrooms.”

Abu Yousef also stated that the case is being treated unfairly both by the judiciary and the media.

“The judiciary is supposed to cut-off the hands of anyone who touches the Quran,” Abu Yousef said.

Abu Islam, accompanied by his son, was filmed burning the Bible in front of the US embassy in Cairo as a crowd of supporters cheered his actions on 11 September. Their actions were a reaction to the release of an anti-Islam film, Innocence of Muslims.

Abu Islam is considered the first Muslim to face charges of contempt of Christianity in Egypt. Azziza El-Taweel, Egyptian lawyer, explained that all previous contempt of religion cases were filed against Christians, or accused Muslims of insulting Islam.