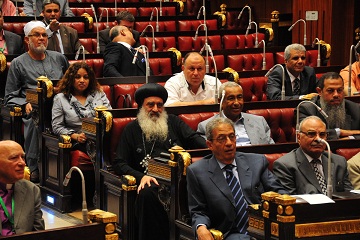 The three churches with official representatives in the Constituent Assembly announced their total withdrawal from the body on Friday evening, signaling their rejection of the draft constitution.

The decision came after a three-hour long meeting at St. Mark’s Cathedral in Abbaseya between acting head of the Coptic Church Bishop Pachomious, and the Coptic, Catholic, and evangelical churches’ members of the Constituent Assembly, and their legal and political advisers. Presidential adviser Samir Morcos also attended the meeting, although not in an official capacity.

In a joint statement the churches said they had been closely following the work of the Constituent Assembly and had examined the current draft constitution before coming to a final decision.

“The Egyptian churches followed the work of the Constituent Assembly with interest, and studied the outcome of the draft constitution,” read the statement. “The Egyptian churches felt discomfort with the trends that prevailed in the writing of the draft constitution. The constitution in its current form does not achieve the national consensus desired and does not reflect the identity of the diverse Egypt that is entrenched across generations. It is a departure from the Egyptian constitutional heritage instituted by the country’s Muslims and Copts and is the diminution of the rights, freedoms, and citizenship gained by Egyptians through the ages.”

Pachomious and other members of the meeting took special exception to Article 221, which is an extension of Article 2 of the draft constitution. The article states “the prinicples of Islamic Shari’a include its general sources, the principles and maxims of its theoretical and practical jurisprudence, and its reliable and authoritative sources in Sunni legal and theological reasoning.”

The head of the Coptic Church and other members in the meeting agreed that the article provided too much loose wording that could be manipulated by Islamist political groups.

Church representatives, alongside Al-Azhar, withdrew from the last Constituent Assembly, which was eventually dissolved. “There was no coordination with Al-Azhar this time,” said Naguib Gabriel, who was involved in the church deliberations. “Al-Azhar doesn’t have the same issues with the constitution that we have.”

“Our withdrawal wasn’t just for the sake of Copts, but for the cause of a civil state,” Gabriel added.

A body of 50 members at the cathedral made the decision. Forty three voted in favour of withdrawal, five voted to delay withdrawal, and two objected. Before the meeting, Bishop Paul of Tanta, who was a member of the assembly, visited the Coptic Church’s next Pope, Bishop Tawadros of Beheira, at St. Bishoy’s Monastery in Wadi Al-Natroun, to discuss his perspective of the draft constitution ahead of his Sunday enthronement.