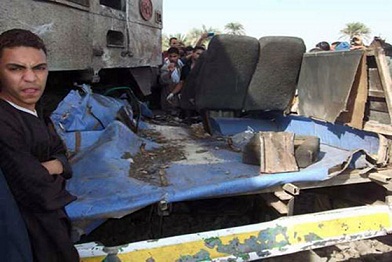 A train in the Manfalout area of Assiut has collided with a school bus, killing dozens of children. Minister of Transportation Mohamed Rashad Al-Mateeny resigned after the deadly collision.

The Ministry of Health announced in a statement on Saturday afternoon that the death toll had reached 51 schoolchildren, with more than a dozen injured.

Families of those who died have blocked the agricultural road in Assiut, demanding the government respond swiftly to the tragedy.

Prime Minister Hesham Qandil went to Upper Egypt with a fact-finding committee a few hours after the accident. The team will prepare a report summarising the causes of the collision and gather eyewitness accounts.

“Those responsible will be given the maximum penalty,” said the prime minister.

The government has decided to initially compensate the families of those who died with EGP 5,000 for each child lost in the collision. A further compensation package is expected to follow.

Head of the Railway Authority Mostafa Qenawi also resigned, and will be referred to investigation.

Minister Al-Mateeny had already reportedly considered resigning in the aftermath of a train collision in Fayoum that killed three people and injured dozens. An initial investigation showed that the crash may have been due to negligence.

Presidential spokesman Yasser Ali released a statement on Saturday morning saying that President Mohamed Morsy instructed the prime minister, the minister of health, the minister of defence, and the governor of assiut to provide all the assistance they could to the families of the victims.

Morsy also expressed his condolences, and demanded that investigations be undertaken as soon as possible as a first step to find those responsible and hold them accountable.

The crash occurred at around 7am on Saturday when a private school bus collided with a train heading northbound from Assiut towards Minya.

Many Egyptian political actors provided reactions to the train crash. Former presidential candidate Abdel Moneim Aboul Fotouh, who is the head of the Strong Egypt Party, travelled to Assiut on Saturday to assess the damage.

“The full development of Egypt’s rail system has become an issue of intolerable delay,” said the Popular Current in a statement. “Any disruption to [improvements in the rail system] is complicity in death.”

The Popular Current demanded that the government act in a strong manner not only to provide assistance to the families of victims, but to take steps to improve the poor condition of Egypt’s railway system.

Al-Dostour Party also released a statement saying that it would sent a delegation to Assiut in order to express sorrow and solidarity with the families of the victims.

The Freedom and Justice Party offered its condolences and strongly recommended the reform of the Ministry of Transportation, to avoid future tragedies of a similar nature. It also suggested that the government seek ways to provide support to the families of the victims.

The Egyptian Social Democratic Party mourned the event and said the resignation of the Minister of Transportation was not enough, advocating widespread reform for a sector of the country that it claimed had been long neglec

Activists pointed to Saturday’s collision as an example of the ineptitude of the current government, demanding the resignation of Qandil and his cabinet.

Presidential spokesman Yasser Ali responded by telling reporters on Saturday that Morsy evaluates the individual performances of all his ministers separately, based on concrete guidelines.

Twelve people also died and three were injured on a desert highway on Saturday, when a truck crashed into a minibus. The truck was driving on the wrong side of the road, and the driver was arrested after the collision.

Social Solidarity Minister to give subvention for bus crash victims