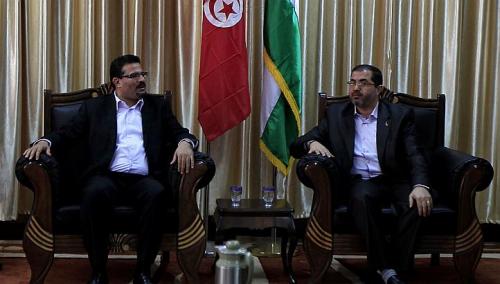 Rafik Abdessalem, the second top-level diplomat to travel to Gaza in as many days, made the remarks as Hamas was locked in an escalating confrontation with the Israeli military.

“Our message to the international community is that this blatant Israeli aggression on our people in Gaza must stop,” he told AFP as he visited the ruins of the Hamas government headquarters which was flattened overnight in an Israeli strike.

His trip came a day after Egypt’s Prime Minister Hisham Qandil paid a solidarity visit to Gaza and had his photograph taken in front of the government building with his Hamas counterpart, Ismail Haniya.

As the Tunisian minister examined the devastation, another loud explosion could be heard nearby, an AFP correspondent said.

“This aggression is no longer acceptable or legal by any standards,” he said, calling on the Arab League to act to halt the aggression when it gathers for an emergency meeting in Cairo later on Saturday.

Abdessalem arrived in Gaza just before 0800 GMT, crossing through the Rafah border crossing with Egypt as Israel staged fresh raids on the city, killing five Palestinians.

Three more people, all of them Hamas militants, were killed in a strike on Maghazi refugee camp in central Gaza just before his arrival.

Officials had earlier said he would meet Haniya but it was not clear when or where, with the Hamas premier widely believed to be in hiding.

Until now, 38 Gazans have been killed and 345 wounded since Israel began Operation Pillar of Defence on Wednesday afternoon, with the military saying it had struck 830 targets across Gaza.

In the same period, militants have fired more more than 580 rockets over the border, killing three Israelis and injuring 13, 10 of them soldiers.

Tunisian President Moncef Marzouki spoke with Haniya on Friday in a conversation in which he expressed “Tunisia’s solidarity with the struggle of the Palestinian people”.

He also denounced Israel’s aerial bombardment as “a barbaric aggression” as well as the “international silence that encourages such injustice.”

Tunisia’s ruling Ennahda party and others are demanding the “criminalisation of normalised relations” with Israel be written into the country’s new constitution.

Tunis had had close links with the Palestinians for years, hosting the Palestine Liberation Organisation between 1982 and 1994 after it was expelled from Lebanon.