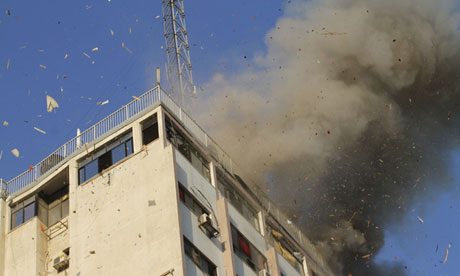 Russia’s state-run RT global television broadcaster said its office was badly damaged in the incident, adding that none of its staff were hurt.

The military defended the strike, which left one Palestinian journalist without a leg, saying it had targeted Hamas operational communications and had sought to minimise civilian casualties.

But the local Foreign Press Association expressed its concern.

The first Israeli strike on a media building came around 2am (0000 GMT), as Israeli navy ships fired a barrage at the Gaza shore elsewhere.

“At least six journalists were wounded, with minor and moderate injuries, when Israeli warplanes hit the al-Quds TV office in the Showa and Housari building in the Rimal neighbourhood of Gaza City,” said health ministry spokesperson Ashraf al-Qudra.

Witnesses reported extensive damage to the building, and said journalists had evacuated after an initial strike, which was followed by at least two more on the site.

The wounded were taken to Gaza City’s Shifa hospital. One journalist lost his leg in the attack, Qudra said.

A second raid hit a different, nearby media building at around 7am (0500 GMT).

“We have two journalists injured in the Shuruq building, which houses Al-Aqsa TV, where there has been an air strike,” Qudra told AFP. Al-Aqsa TV is another Hamas-affiliated television station.

The Gaza reporter with Russia’s RT was separated by only a “thin wall” from the Palestinian station’s office and was damaged in the attack.

“We were not directly hit,” correspondent Saed Swerky said. “The Israelis fired four rockets and destroyed the office of the [Palestinian] channel. Our office was next door and so we could not work any more.”

The station had earlier issued a statement reading: “RT’s office in Gaza destroyed after Israeli attack.”

Imad Efranji, director of the Al-Quds TV office, slammed the incident as “a new crime against the media.”

The Israeli military in a statement said it had “targeted two Hamas operational communication sites that were identified by precise intelligence.”

“The first site… was an infrastructure of Hamas’ operational communications, located inside a civilian building,” the statement said.

“As a result, and in order to minimise the damage to non-involved persons, the IDF [army] only targeted the communication devices which were located on the roof of the building, and not the operations room of Hamas… on one of the floors.”

The military said the second strike, on the Shuruq building, also targeted “part of Hamas’ operational communications that was deliberately located on the roof of the building, in which several international media bureaus reside.”

The statement called on “international journalists… to stay clear of Hamas’ bases and facilities, which serve them in their activity against the citizens of Israel.”

The Foreign Press Association issued a statement saying it was “concerned” by the attacks, adding that both buildings house or have been used by members of the association.

The statement pointed to a 2006 UN Security Council resolution condemning attacks on journalists in conflict zones.

Egypt’s Taliaa Theatre to celebrate its 60th anniversary in 2022