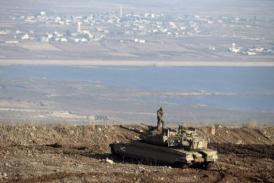 Jerusalem (AFP) – Israeli artillery fired into Syria early Sunday after gunfire from Syria hit an army vehicle but caused no injuries, the Israeli military said, in the latest spillover of violence from the bloody civil war raging across the ceasefire line.

“Shots were fired at IDF [Israeli army] soldiers… in the central Golan Heights,” an army spokeswoman told AFP, adding that the Syrian fire hit “a vehicle.”

“Soldiers responded with artillery fire towards the source of the shooting… a direct hit was identified,” she said without elaborating.

It was the latest in several exchanges over the past week.

Last Sunday, Israeli troops fired a warning shot across the UN-monitored ceasefire line in response to Syrian fire, in the first instance of Israeli fire directed at the Syrian military in the Golan Heights since the 1973 war.

The following day, Israeli tanks fired again, confirming “direct hits” on the source of a mortar round that struck the Golan Heights.

On Thursday what the army described as “stray bullets” hit Israeli-controlled territory again.

Israel has complained repeatedly to the United Nations over the incidents and did so again after the latest shooting.

“The IDF has reported the incident to UN officials as usual,” the Israeli spokeswoman said.

Fears of a spillover of the conflict which has ravaged Syria for the past 20 months and left more than 39,000 dead, have widened as violence has spread to Syria’s borders with Turkey, Lebanon, Jordan and Iraq.