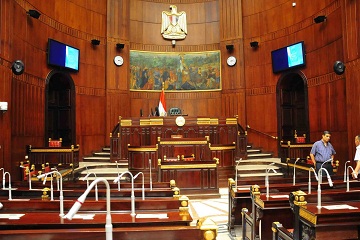 The crisis in the Constituent Assembly continues as 15 members, who froze their membership last week, announced their complete withdrawal on Sunday. This follows a decision by representatives of Egypt’s Christian churches to do the same.

Members of the Wafd Party also withdrew while Ghad Al-Thawra Party representatives announced they would freeze their membership and make their final decision on whether to stay next Saturday.

A further 10 members from the assembly’s reserve list and the technical advisory committee joined the 15 who withdrew today.

The 24 members froze their membership on Tuesday and submitted a list of demands to the assembly chairman, Hossam El-Gheriany.

They withdrew on Sunday, after none of their demands were met. Representatives of Egypt’s Coptic Orthodox, Coptic Catholic and Coptic Evangelical churches announced their withdrawal on Friday after meeting with Bishop Pachomious, the Coptic Orthodox acting-pope at the time.

Two members of the Wafd and Ghad Al-Thawra parties announced they would not withdraw or freeze their membership in defiance of their parties’ decisions. At least 24 members have so far withdrawn or frozen their Constituent Assembly memberships in addition to 11 members from the Egyptian Social Democratic, Free Egyptians and Taggamu’ Party members who resigned immediately after the assembly’s formation, bringing the total to 35.

The 100-member assembly needs a 67 per cent majority to pass constitutional articles and failing that a 57 percent second round of voting is enough to pass an article. It is currently holding daily meetings to finalise the draft and put it to referendum before the end of the months.

The non-Islamists who resigned are demanding the deadline be extended by 90 days in order to allow more time for debate and consensus. The assembly faces a court case that could render it dissolved, however, and Islamists inside it want to finish the constitution as soon as possible.

On Sunday 23 human rights organisations released a statement declaring their rejection of the current constitution draft, describing it as unrepresentative of the Egyptian people’s cultural, religious, political and racial diversity or the “goals of the 25 January revolution.”

“The Constituent Assembly has revealed its opposition to human rights by not including an article in the constitution forcing the state to adhere to international treaties it is already a signatory to, and its obvious attempt at distancing Egypt from all international human rights treaties,” said the statement.

The organisations accused the assembly of attempting to found a state similar to Iran’s Guardianship of the Jurist system where religious scholars dominate all important aspects of decision making, only with “a Sunni twist,” through giving Al-Azhar power to interpret Shari’a, which all laws are to be based on, therefore making the institution stronger than an elected parliament.