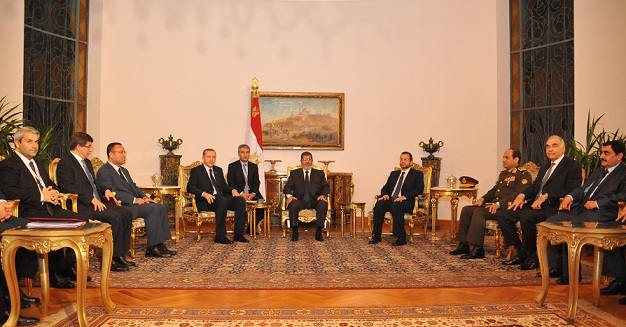 In a press conference held on Saturday evening, Morsy and Erdoğan announced that agreements were endorsed in several areas including agriculture, industry, transportation, tourism and civil aviation. Egyptian and Turkish ministers signed seven agreements on Saturday evening and the remaining pacts were signed early on Sunday.

During the visit of the Turkish premier, Morsy announced that Turkey has supplied Egypt with a $2 billion loan, with no fixed date of repayment, to support to Egypt’s democratic transition. “Today, we establish cooperation and companionship to achieve what benefits both countries,” Morsy told reporters.

“I would like to thank Turkey for trying to push investment up to $5 billion, and helping us benefit from the international market,” Morsy said.

Erdoğan said that 350 Turkish investors joined him in Cairo. “It is still not enough. We have to increase investment all the way to $10 billion within the next four years,” the Turkish premier told reporters.

Turkish investment in Egypt is currently at $1.5 billion.

“Ministers from both countries will continue efforts to encourage our businessmen to invest in Egypt,” Erdoğan said. He added that the coming period will witness more tourism enterprise.

Morsy and Erdogan said they discussed the current situation in the Gaza Strip and possible solutions to help put an end to the bloodshed.

“There is a common agreement on the importance of having the international community aware of the dangers of the attacks on Gaza. Everyone has to be aware that war cannot ever lead to stability or genuine peace,” Morsy said. He added that Egypt is keen to mediate a truce between the Palestinian and Israeli sides.

On Wednesday, a ceasefire was agreed to stop the attacks on both sides, but “Israel has escalated the situation and attacks have increased, with 40 killed and more than 300 injured in Gaza,” Morsy said. Three Israelis have been killed since the beginning of the recent violence.

Turkish efforts to stop the attacks on Gaza have included high level diplomatic phone calls. “I have spoken with [US President Barack] Obama and [Russian President Vladimir] Putin over the phone and asked them to intervene. We have not taken any practical initiatives in this regard,” Erdoğan said.

Erdogan also spoke about Syria, describing recent developments as a “genuine catastrophe.” He noted that there are about 2.5 million Syrians counted as homeless, and the number of Syrian refugees in Turkey has reached 170,000. “There must be an intervention from the [UN] Security Council. Bashar Al-Assad gains more time as the council has not taken action until now,” Erdoğan said.