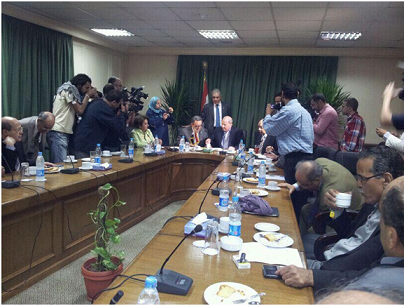 Representatives from 15 political parties and movements signed the founding statement for the Egyptian National Alliance on Saturday at the Leadership and Management Development Centre in Giza.

“The alliance is a political and not an electoral one,” said Amany Al-Khayat, media secretary of the ESDP. She added that parties decided to unite over a common vision on four crucial issues.

“The constitution, social justice, election law and the flawed formation of the Constituent Assembly are the four pillars of the alliance,” Al-Khayat said.

She added that the alliance came after months of meetings and negotiations. Equal social and economic rights for all citizens is a main concern for these parties, which represent the left and centre left ideologies.

“During the era of the ousted regime we called for implementing the constitution regarding social justice, now corruption and injustice will be legalised in the draft constitution,” Al-Khayat said.

She added that the alliance could also join forces in elections but only if clear and fair elections and political rights laws were drafted.

“I don’t want people to feel desperate, there is hope and people are becoming more responsive to parties working on the ground… actions will be taken and people will have their rights” she said.

The alliance is scheduled to launch its joint activities with a conference on 8 December in Damanhor.