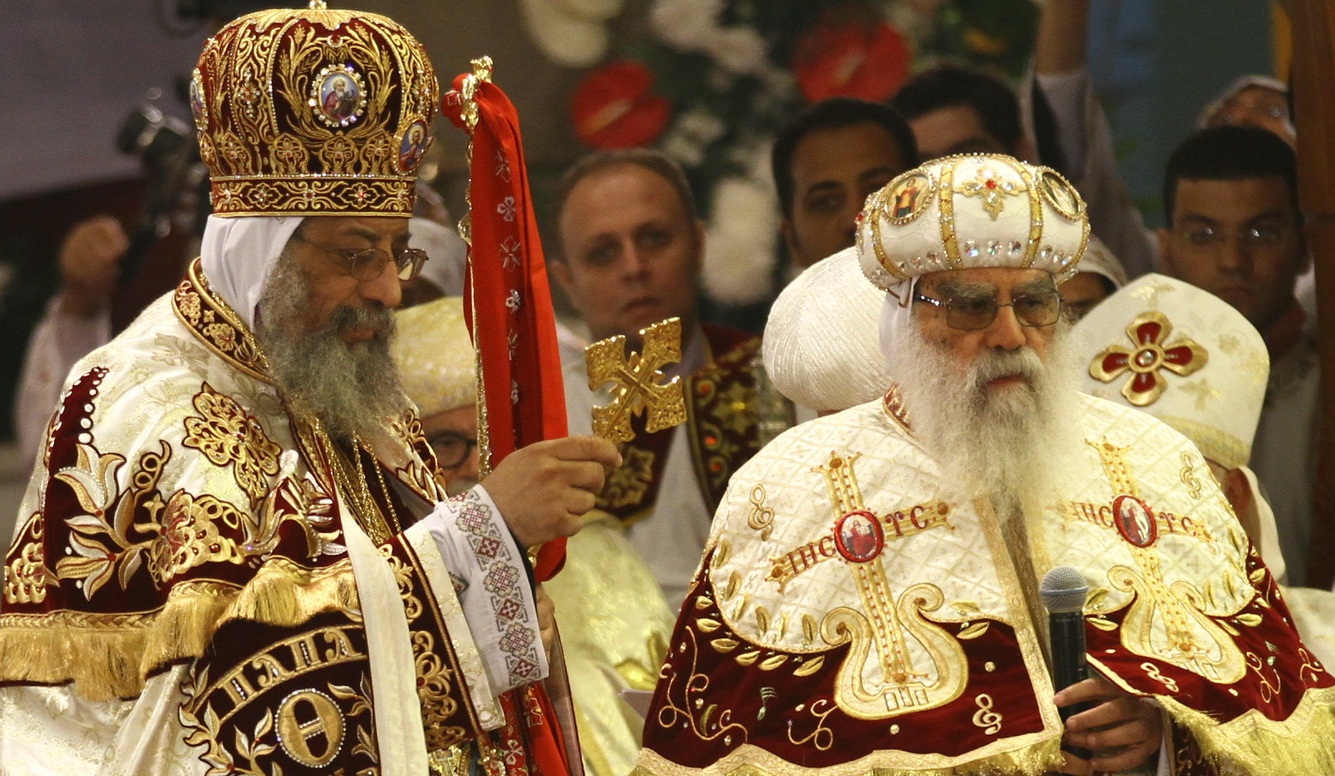 The Coptic Orthodox Church officially appointed its 118th pope on Sunday morning at St. Mark’s Cathedral in Al-Abbaseya. The papal ceremony, the first since the enthronement of Pope Shenouda III on 14 November 1971, was attended by thousands of people, packed into the cathedral.

President Mohamed Morsy, who had been invited to the ceremony, sent a representative in his place.

A procession of bishops and other clergy made their way to the cathedral shortly after the service had begun. As the cathedral bells continuously rung, Tawadros was given a ceremonial key, symbolising his new leadership role and responsibilities.

An emotional Tawadros, then made his way down the aisle flanked by the two senior-most bishops.

The papal selection wept as more than 100 bishops took turns reading parts of the prayer used in the papal ceremony, speaking languages including English, French, and German to represent their dioceses.

As he reached the front of the cathedral, Tawadros put on the tonia and sedra, liturgical vestments worn by the clergy. The golden sash (sedra) depicted the twelve disciples, as the church often refers to its leader as the “thirteenth disciple.” He also put on his papal crown for the first time.

After the enthronement, Pachomious read a statement written by the new pope, in which Tawadros stressed unity and his mission to represent all Egyptians. “We open our hearts to all religions,” he said, “because religion is for God and the nation is for man.”

After his official enthronement, members of the Holy Synod took turns congratulating him and kissing his hand. Prime Minister Qandil also approached the throne to extend his congratulations.

“President Morsy claimed he is a president for all Egyptians. We want to actually see that on the ground,” said George Ishaq, an activist and prominent member of Al-Dostour Party both in reference to the president’s absence and the current situation of the Constituent Assembly, from which the Coptic Church withdrew.

The liturgy concluded with Tawadros visiting the relics of St. Mark, located in a shrine in the cathedral complex, and processing to the papal residency, located across the cathedral as Copts lined the path cheering and holding flowers for their new spiritual leader.

Pope Tawadros II will fast for one year following Sunday, aside from major feasts, as is custom for new patriarchs in the Coptic Church.

According to Coptic tradition, the first head of the Egyptian Church was Saint Mark the Evangelist, one of the 70 apostles of Jesus. The pope is the “first among equals” of the Holy Synod (the church body made mostly of bishops) and responsible for determining the Coptic Church’s stance on matters concerning faith.

Pope Tawadros II has been vocal about the withdrawn political role he hopes to play during his papacy. On Saturday, the Coptic Church, along with other Christian denominations, announced its withdrawal from the Constituent Assembly, claiming that the current draft does not reflect the identity of the Egyptian people.

The church’s new patriarch was formerly the General Bishop of Beheira and has a close working relationship with Metropolitan Pachomious, the Coptic Church’s interim leader since March.

The Coptic Orthodox Church is the largest Christian community in the Arab world, making up roughly ten percent of Egypt’s population. Over recent decades, millions of Copts have established communities overseas in places such as North America, Europe, and Australia.