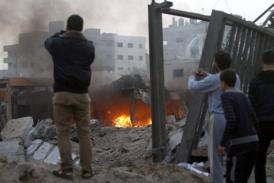 The latest bloodshed in the densely populated enclave came after a night of earth-rattling raids, one of them levelling a police station, and sustained fire from Israeli navy ships.

As the violence raged for a sixth day, ceasefire efforts gathered steam, with Hamas officials in Cairo saying Egyptian-led talks with Israel were “positive” but now focused on the need to guarantee any truce.

After a strike on a Gaza City home killed a family of nine on Sunday, the bloodiest day yet of the conflict with 29 killed, angry mourners flocked to the funeral of the five children and four adults whose bodies were carried through streets wrapped in Palestinian flags.

“Do children fire rockets?” shouted a man through a loudspeaker, as the crowd roared back: “No!”

The violence, which comes as Israel gears up for a general election on January 22, raised the spectre of a broader Israeli military campaign like its 22-day Operation Cast Lead, launched in December 2008.

Analysts say Israel’s leadership appears satisfied with the success of its latest operation — dubbed Pillar of Defence — and that could it be ready for a ceasefire.

But the Jewish state has signalled it is ready to expand the operation, while Gaza’s rulers Hamas may feel emboldened after securing the support of the recently-installed Islamist governments of Egypt and Tunisia.

The overall death toll from the Israeli raids on the Palestinian territory hit 95 on Monday after an air strike on car in northern Gaza and as four people died of injuries suffered in earlier raids.

The Israeli army said that after a lull overnight, 33 rockets have been fired so far on Monday and another four intercepted by the Iron Dome anti-missile system.

So far, the Israeli military has struck more than 1,350 targets in Gaza, and 570 rockets have stuck southern Israel while another 302 were intercepted.

The latest negotiations aimed at ending the conflict, conducted behind closed doors in Cairo, ended without agreement on Sunday. But all sides have expressed a willingness to engage in more talks.

Hamas has demanded Israel lift its six-year siege of Gaza as a basic condition for the end to rocket attacks and is also understood to be seeking seeking a guarantee that Israel will stop assassinating its leaders.

Israel’s targeted killing of a top Hamas military commander on Wednesday was the trigger which started the current flare-up.

Hamas won the backing of rival Palestinian factions Fatah, which runs the West Bank, and Islamic Jihad on Monday.

“From here, we announce with other (factional) leaders, that we are ending the division,” senior Fatah official Jibril Rajoub told a thousand-strong crowd who gathered for a demonstration in Ramallah.

Israel has showed little sign of being ready to call off or even briefly halt its campaign, and threatened to expand its operation, with Foreign Minister Avigdor Lieberman insisting that “the first and absolute condition for a truce is stopping all fire from Gaza”.

This has piled even more pressure on Egypt’s Islamist President Mohamed Morsi and prompted UN leader Ban Ki-moon to promise to visit the region soon.

Ban was due in Cairo on Monday for talks with Morsi ahead of a visit to meet Israeli and Palestinian officials on Wednesday.

Speaking in Jerusalem after talks with Israeli President Shimon Peres, Mideast Quartet envoy Tony Blair expressed hope a truce would firm up in the coming days.

“I very much hope that during the coming days we can achieve cessation on a basis that stops the threat of missiles coming from Gaza, targeted at Israeli civilians and also then relieves the people of Gaza,” he said in remarks broadcast on public radio.

German Foreign Minister Guido Westerwelle was also due to arrive in Jerusalem on Monday just days after Prime Minister Benjamin Netanyahu warned Israel was ready to “significantly expand” its operation.

Early on Monday, public radio reported that some 40,000 reservists were already massed near the Gaza border.

US President Barack Obama has blamed the violence on Palestinian rocket attacks, but said he would prefer a resolution without Israel “ramping up” military activity.