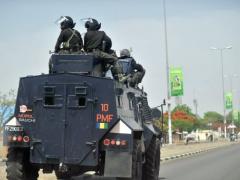 Nairobi (AFP) – Gunmen on Monday killed three soldiers in Kenya’s northeastern town of Garissa just a day after a bomb exploded in a minibus in the capital Nairobi killing seven, police sources said.

“The three were shot as they replaced a flat tyre in their vehicle. The gunmen caught them by surprise and shot them,” said a police source who requested anonymity.

Multiple police sources say that violence and riots erupted in Garissa for a brief period before calm was restored after police and military officers were deployed in the town.

The Monday attack follows a Friday shooting that left two police officers dead in the same town. Last week, an ambush on a police unit on a mission to recover stolen cattle in another part of the country left 42 policemen dead.

Kenya has suffered a wave of grenade and gun attacks, often blamed on Al Shabab sympathisers and sometimes aimed at police targets, since its army went into Somalia last year to flush out the Islamist fighters.