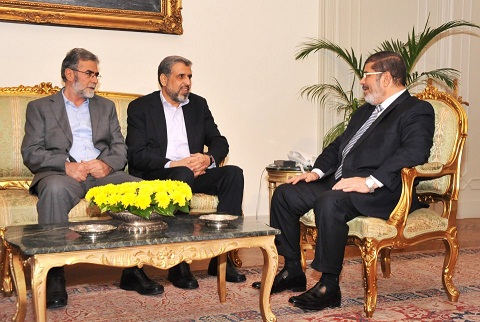 President Mohamed Morsy met with the chief of Hamas’ political bureau, Khaled Meshaal , and the secretary general of the Islamic Jihad movement, Ramadan Abdullah Shalah, on Sunday evening to discuss the situation in Gaza.

A statement released from the presidential palace said the meeting discussed “Egyptian efforts to stop the Israeli aggression and bombardment on the Palestinian people in Gaza.” Morsy also “listened to the position of the two movements on the events.”

In a press conference on Monday afternoon, Meshaal called for Egypt and other countries to pressure for a ceasefire.

Israeli foreign ministry spokesperson, Paul Hirschson, said, “if we cannot secure long-term peace for the residents of southern Israel we will be forced in to a ground offensive.”

In a press conference on Saturday evening, Morsy said, “there are some signals for the possibility of a ceasefire in the coming days.” He added, “if there is more occupation there will be negative consequences.”

The Israeli operation in Gaza continued as did the retaliatory fire from Hamas and other militant groups in Gaza.

Dr Hani Al-Basoos, assistant professor of political sciences at Islamic University in Gaza and a resident of Gaza City, said “the bombing has intensified since yesterday. Today 20 people alone have been killed by Israeli airstrikes. They are hitting civilians’ homes, last night 11 people from one family were killed.” On Sunday Hirschson said the Israeli army are exclusively targeting Hamas buildings.

On the possibility of a unity deal between the Palestinian factions, Al-Basoos said, “a unity deal between Hamas and Fatah would not end the division but would only serve to solve the current crisis. However, this would be a serious step towards full unity which could happen after the Israeli attack ends.” Al-Basoos also said Nabil Shaath, an advisor to President Mahmoud Abbas was in Gaza on Monday to promote unity between the two factions.

“If Israel launches an invasion of the Gaza Strip I do not think they will get very far. I believe they will only be able to occupy the outskirts, the area is too densely built up for a full invasion,” said Al-Basoos.

One resident from southern Israel, who declined to be named, said “attacks from Gaza are a normal thing for those living near the border,” He added, “there are only so many times you can appeal to the United States and the international community before you have to take action.”

“There was a direct hit on a house in Kiryat Malakhi at around 11pm on Sunday night. It seems they are targeting residential areas but there is an air force base nearby too,” said the resident.

Kiryat Malakhi is the city where three Israelis were killed when a missile fired from the Gaza Strip landed in their front room last week.

“The people in Kiryat Malakhi are not used to missiles from Gaza. Many families have gone to the north for safety reasons and apparently life there is going on as normal. The three people who were killed last week didn’t follow the safety guidelines; some say that they were in the front room when the sirens were going off and they were looking out the window to see the iron dome system working.”

“Nobody really knows what is happening, we hear talk of ceasefire, then talk of escalation and missiles continue to be fired,” said the resident. “We have had about four sirens a day and people are scared to go far from their homes in case the sirens go off and they don’t know a safe place,” he added.

According to the resident the Israeli media are “reporting on Hamas propaganda, they report that Hamas claim they have hit the Knesset. Reports say that over 1000 targets in Gaza have been hit including Hamas armouries and the Hamas headquarters.”

An Israeli Defence Force spokesperson, Lieutenant Colonel Avital Leibovich, said, “since the beginning Hamas have launched over 1000 missiles, some of which are Iranian manufactured. Some have reached Tel Aviv and the outskirts of Jerusalem.”

“We have been using airstrikes to target Hamas, for example one of our targets is a soccer stadium in the middle of a densely populated area. Hamas used the stadium as a base to launch missiles from,” said Leibovich.

When asked to comment on civilian casualties, Leibovich said, “most of the blame for this lies with Hamas. When they use civilian areas for terrorist activities then these things happen, Hamas chose to launch missiles from civilian areas. The majority of the casualties were terrorists.”

Secretary General of the United Nations Ban Ki-Moon will meet with Secretary General of the Arab League, Nabil El-Araby on Tuesday morning to discuss the situation. In a statement made by Ban in New York he said “I am heading to the region to appeal personally for ending the violence and contribute to ongoing efforts to that end.” In the statement he condemned the violence from both sides and said urged “the parties to cooperate with all efforts led by Egypt to reach an immediate ceasefire.”

Since the violence began the current death toll in the Gaza Strip is 98, according to AFP. The confirmed death toll in Israel is three. These figures were correct at the time of writing.