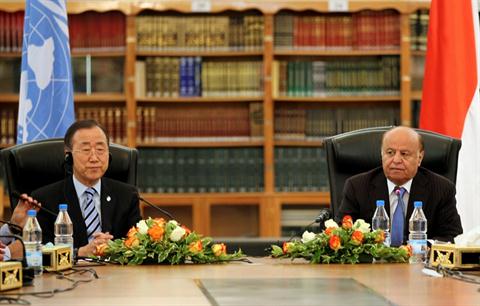 Sanaa (AFP) – Yemeni President Abdrabuh Mansur Hadi stressed his commitment to ensuring the success of the political transition in his country, during a speech in Sanaa on Monday attended by UN chief Ban Ki-moon.

Hadi, during a ceremony to celebrate the first anniversary of a power transition agreement which saw former President Ali Abdullah Saleh step down, also vowed that legislative elections would be held on schedule in February 2014.

He urged political parties in Yemen to “overcome differences” and demonstrate “cohesion and understanding” to pave the way for national dialogue.

The dialogue was scheduled for mid-November but has not yet begun, with no reason for the delay and no new date announced.

The transition deal, sponsored by the United Nations and Yemen’s oil-rich Gulf neighbours, was signed in Riyadh on 23 November 2011, after months of anti-government protests and deadly clashes between pro- and anti-Saleh troops.

The pact brought Hadi to power for an interim two-year period in a single-candidate vote.

It also called for a national dialogue where all parties, including the opposition, youth groups and northern rebels are to come together to agree on a new constitution and on formalities for a presidential and parliamentary vote.

Hadi has repeatedly urged all parties in Yemen to join the critical talks, but the Southern Movement, an influential alliance of groups seeking autonomy or independence for the south, said on 3 October it would not attend.

Ban told the meeting that national dialogue must be open to all Yemenis including representatives from the country’s various regions.

Visiting the impoverished country for the first time, Ban held talks with Hadi on his arrival and was later to meet ambassadors from the five permanent Security Council members and envoys from neighbouring Arab Gulf monarchies, a local diplomat said.

Gulf Cooperation Council Secretary General Abdullatif Al-Zayani also re-affirmed the support of the Gulf monarchies to the transition in Yemen.

Late on Sunday, Zayani discussed with Hadi “ongoing preparations for the national dialogue conference which will start soon,” according to state news agency Saba.