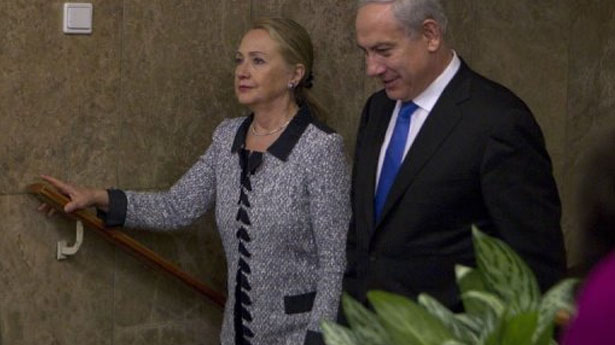 Before their meeting Clinton delivered a message from US President Barack Obama: “America’s commitment to Israel’s security is rock solid and unwavering. That is why we believe it is essential to de-escalate the situation in Gaza.”

Clinton outlined “the goal must be a durable outcome that promotes regional stability and advances the security and legitimate aspirations of Israelis and Palestinians alike.” The task of achieving this stability rests with Egypt, “as a regional leader and neighbour, Egypt has the opportunity and responsibility to continue playing a crucial and constructive role in this process.”

Netanyahu welcomed Clinton and thanked her, Obama and people of the US for their “strong support for Israel in this hour of need.” He gave special thanks to the US for their support for the Iron Dome air defence system which has intercepted more than 300 missiles fired from Gaza.

“One of the things that we’re doing is trying to resist and counter a terrorist barrage which is aimed directly at our civilians, and doing so by minimizing civilian casualties,” said Netanyahu. He added “the terrorist enemies of Israel are doing everything in their power to maximize the number of civilian casualties. Obviously, no country can tolerate a wanton attack on its civilians.”

Clinton also announced her intentions to visit Ramallah on Wednesday to meet with Palestinian Authority President Mahmoud Abbas. She will also travel to Cairo where it is thought that she will meet with President Mohamed Morsy.

The clashes started Wednesday, 14 November when Israel launched a military offensive under the name Operation Pillar of Defence. Israel claims to have launched the operation to target “terror sites.” As violence continued 140 Palestinians have died; 34 are children and over 1100 injured. At least 25 mosques have been targeted in addition to several media headquarters, including AP, AFP and Al Jazeera offices. On the Israeli side, five have died and eight wounded while four houses, a school and a car suffered damages with 800 rockets fired from Gaza over the past week.