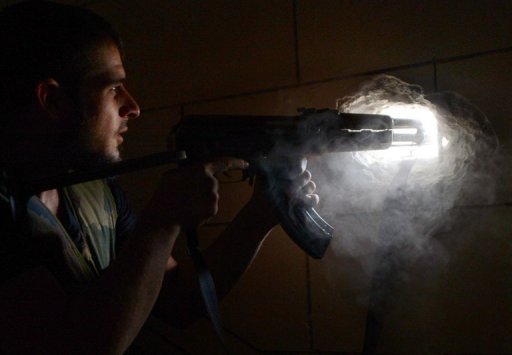 The clashes came less than two days after rebels, armed with at least five tanks according to a military source, took full control of the sprawling Base 46 in the same province.

The Britain-based Observatory said that at least 29 people had died in clashes in Ras Al-Ain, near the Turkey border, over the past 24 hours.

The Kurdish fighters are members of the People’s Defence Units, the armed wing of the Democratic Union Party (PYD) which is linked to Turkey’s rebel Kurdistan Workers’ Party (PKK).

Activists in Ras Al-Ain, located in the largely Kurdish province of Hasakeh, said that 35 Kurds were taken prisoner by the Gharba Al-Sham and Al-Nusra Front, while 11 insurgents were captured.

A Ras al-Ain activist, who gave his name only as Hevidar, told AFP that tension has been high between rebels and the PYD since the insurgents took the town last week.

The clashes on Monday erupted after a Kurdish demonstration, which demanded that all rebels not from the town leave, was met with refusal.

Syria’s civil war, which activists say has killed more than 39,000 people, began as an anti-regime uprising in March last year but morphed into a conflict pitting mainly Sunni rebels against President Bashar Al-Assad’s regime dominated by his minority Alawite sect, an offshoot of Shi’a Islam.

But earlier this month Kurdish residents backed by PYD militiamen began taking control of towns near the border with Turkey as pro-government forces pulled out without a fight, sparking tension and clashes with established rebel groups in the region.

North and northeast Syria are home to most of the country’s two million-strong Kurdish minority, who have mostly stayed out of the civil war leading to angry allegations by the opposition that they are cutting deals with Al-Assad’s regime.

Kurds question why the rebels entered a safe area, which they say is home to thousands of refugees who fled embattled areas of the country.

Violence also erupted on Tuesday in the capital Damascus when the army shelled the southern Damascus district of Hajar Al-Aswad, the observatory said, while state media reported that two mortars hit the ministry of information building.

Southeast of Damascus, regime forces shelled Daraya, the scene of the worst massacre in the 20-month conflict, in the latest of several attempts to storm the town over the past few days, the watchdog said.

And on the eastern outskirts of the capital, where the army has boosted its operations, three rebels were killed in shelling on the towns of Harasta and Irbin amid fierce clashes which left a fourth insurgent dead.

At least 122 people were killed nationwide on Monday in Syria: 37 civilians; 28 soldiers; and 57 rebels, according to the observatory, which relies on a network of activists, lawyers and medics in civilian and military hospitals.