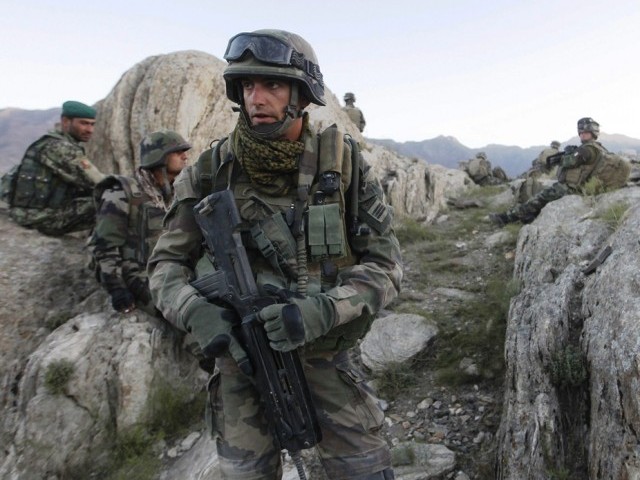 Nijrab Base, Afghanistan(AFP) – France ended its combat mission in Afghanistan on Tuesday, withdrawing troops from a strategic province northeast of Kabul as part of a quickened departure from the war-torn country.

Paris says all French combat soldiers will leave the country next month, two years before allied nations contributing to the 100,000-strong International Security Assistance Force (ISAF) led by the United States are due to depart.

“We urge the others to follow France and leave Afghanistan, end the occupation of Afghanistan and leave the fate of the country to Afghans themselves,” spokesman Zabihullah Mujahed told AFP.

France has lost 88 soldiers in Afghanistan and has been the fifth largest contributor to ISAF, behind the United States, Britain, Germany and Italy.

Paris decided to accelerate its withdrawal after a string of deadly attacks in 2011 and 2012, including a January assault in which an Afghan soldier shot dead five French troops as they were jogging at their Kapisa base.

Then President Nicolas Sarkozy announced that the combat mission would end in 2013, but his successor Francois Hollande brought that forward to the end of 2012, initially to veiled criticism from US officials.

So-called insider attacks have spiralled this year, with a total of 61 NATO soldiers killed by Afghan security personnel, fuelling distrust in the war against the Taliban.

The attacks have led to calls in other Western countries, where the long war is increasingly unpopular, for early troop withdrawals. But NATO has insisted it will follow the agreed programme of pulling out all combat troops by the end of 2014.

Despite 11 years of fighting, a resilient insurgency has led to warnings of a return to civil war or the Taliban coming back to power.

But France is not the first country to end its combat mission.

The United States has pulled out its 33,000 “surge” troops, although it still has some 68,000 soldiers in Afghanistan.

Around 1,500 French soldiers will stay into 2013 to take responsibility for repatriating equipment and training the Afghan army to take over.

The last 400 French soldiers deployed in Kapisa province left Nijrab, the last French base outside Kabul, after a departure ceremony Tuesday.

Kapisa, which straddles key transit routes from Pakistan to the Afghan capital, has been the deadliest French mission in Afghanistan, accounting for 60 of the total French fatalities.

France joined the NATO coalition in late 2001 defending the new government from Taliban insurgents. A US-led invasion had toppled the Taliban government earlier that year for giving refuge to Osama bin Laden and his Al-Qaeda network.

French troops moved into Kapisa in 2008 and clashes with the Taliban and militia increased.

French and Afghan commanders say Kapisa has stabilised but they have been unable to provide supporting statistics and attacks have continued.

“I have not seen terrain recaptured by the insurgency in this zone,” said General Olivier de Bavinchove, the French commander in Afghanistan.

“I don’t share the view of those who predict an apocalypse and the inevitable return of the Taliban. We withdrew 13,000 American soldiers from Helmand in two months. No one tells me the insurgency has recaptured ground.”

Two out of six Kapisa districts are thought to be at least partly controlled by insurgents.

Kapisa’s security will now be the responsibility of 4,700 Afghan police and soldiers, supported by 250 American soldiers, according to General Eric Hautecloque-Raysz, the French commander in Kapisa and nearby district Surobi.

He says he is optimistic about the capacity of Afghan troops.

“The insurgency is 10 times less than the (Afghan) security forces. Therefore, they cannot be beaten,” he said.

Of the 2,200 French soldiers left in Afghanistan, a military official said that about 700 would return to France by the end of the year.

Around 50 trainers will remain in Wardak province, west of Kabul, and 1,500 in the Afghan capital, where most will be tasked with organising the final departure of French troops.

After the summer of 2013, only several hundred French soldiers involved in cooperation or training missions will remain in the country, the military official said.