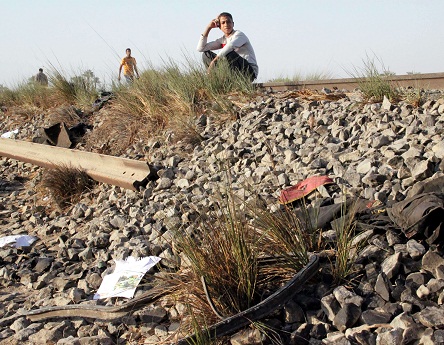 A lawsuit has been filed against President Mohamed Morsy, Prime Minister Hisham Qandil iand other officials, holding them responsible for the deaths of over 50 children in the Assiut train crash.

A train hit a schoolbus children in the Manfalout area of Assiut on Saturday, after the crossing barrier failed to close.

The lawsuit stated that a privately-owned newspaper on 25 September reported that the railway authority spent more than EGP 5 million to develop 1725 railroad crossings, especially in Upper Egypt and the West Delta.

However, railroad crossings workers said there were no development projects implemented. Crossings still used iron chains as barriers and there were no electronic signals to indicate a train was coming.

The plaintiffs also said Cairo-Assiut train drivers had complained to the minister of transport on 8 November about railway defects, including unsafe crossings.

According to the lawsuit, the minister said he would look into the complaints but didn’t.

On Monday, the attorney general of Assiut, Suhag and New Valley, Hazem Abdel Shafy, ordered the imprisonment of a Hawatka Assiut station employee, Hassan Abdel Halim. Hawatka is where the accident took place.

Abdel Halim was imprisoned for 15 days pending investigation. The prosecution accused him of manslaughter, unintended injury, damage to public property and negligence.

Abdel Halim denied the charges, saying he notified the crossing worker of the coming train by phone and registered it in his daily report.

The train driver and his assistant were released by the prosecution.

The Shura Council held a special session on Tuesday to discuss a report about the accident, prepared by the council’s committee on transportation. The session started with a moment of silence for the train victims.

The report stated that the person responsible for the accident was either the crossing worker or the line observer.

It also stressed the need for automated technologies and more strict supervision over workers.

President Morsy accepted the resignation of ex-Minister of Transportation Mohamed Rashad El Mateeny on the same day as the accident.

Presidential spokesperson Yasser Ali later announced that Minister of Housing Tarek Wafik will supervise the Ministry of Transportation until the appointment of a new minister. State-run Al-Ahram reported the government had announced a comprehensive railway redevelopment plan. Ashraf Al-Araby, minister of planning and international cooperation, said the redevelopment would be completed by 30 June.

The Assiut governorate announced a formal funeral on Tuesday for the train victims. Assiut Governor Yehia Keshk will attend the funeral along with Director of Security Major General Abo Al-Qasem Abo Deif and many security and religious figures.

Reports stated earlier that 10 injured were taken to Cairo by military aircraft. The reports were denied by Osama Farouk, the director of Assiut university hospital.

Farouk complained to the minister of health of the lack of security and emergency medications.

He said doctors were attacked by parents and families of children.

A mother of four of the victims and a relative of two others, was admitted to the Abbasseya psychiatric hospital, Al-Masry Al-Youm reported.