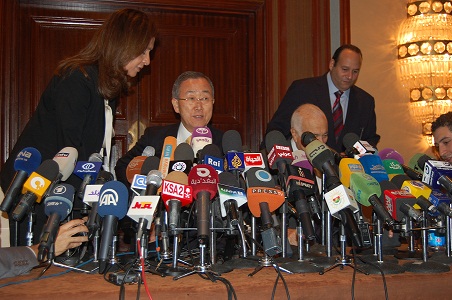 Ban announced he plans to meet with both the Israeli and Palestinian Authority leadership in an attempt to end the violence. He said “I am here to appeal personally for an end to the violence and to offer my help in ongoing efforts to achieve a cease fire.”

He also commended the LAS “for mobilising diplomatic support for efforts led by Egypt to seek a ceasefire. I support these efforts.”

Ban called for all parties to “respect their obligations under international humanitarian law to ensure the protection of civilians.” He added, “that is true of those bearing arms and it is true of those giving the order to use them.”

“Once again families and children are dying as a result of senseless violence, once again Palestinians and Israelis live in the fear of the next strike,” said Ban. He emphasised the necessity “to avoid further escalation including a ground operation which will only result in further tragedy.”

Both El Araby and Ban called for a ceasefire between the two sides. Ban said “my message is clear; all sides must halt fire immediately. Further escalating the situation will put the entire region at risk.”

During their meeting the two men also discussed the ongoing crisis in Syria. Both stressed the need to support the efforts of joint UN and LAS special envoy Lakhdar Brahimi in his mission to find a solution to the Syrian conflict.

At the end of the press conference El Araby and Ban did not take any questions from the media.

Ban also met with Minister of Foreign Affairs Mohamed Amr to discuss the situation in Gaza. Foreign ministry spokesperson Amr Roshdy said Amr “stressed Israel’s responsibility for the deterioration of the situation in the region.”

A UN spokesperson confirmed that Ban travelled to Jerusalem and met with Israeli foreign minister Avigdor Lieberman on Tuesday afternoon.

United States Secretary of State Hillary Clinton is travelling from Cambodia to the Middle East region to weigh in on the situation in Gaza. According to a press statement by Victoria Nuland, a spokesperson for the Department of State, “she will meet with regional leaders, starting with our Israeli partners.”

A source at the US embassy in Cairo hinted that Clinton will also visit the Egyptian capital tomorrow. When asked to confirm the source said “it appears that way.”

During her visit Clinton “will emphasise  the United States’ interest in a peaceful outcome that protects and enhances Israel’s security and regional stability; that can lead to improved conditions for the civilian residents of Gaza,” according to the statement.