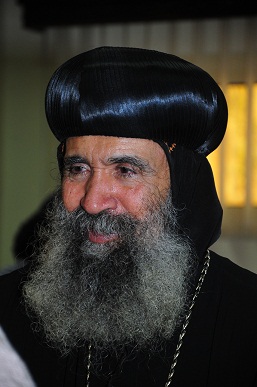 We congratulate you on the enthronement of Pope Tawadros II and would like to ask what rights do the Coptic community demand at this stage?

The first thing is to be able to construct churches with the same ease and speed with which a mosque is constructed. And here I hold the Parliament responsible, the vast majority of whom are Muslim, and the entire Egyptian people, whose majority is also Muslim. This is even applicable to some villages that do not have a Muslim population, why would I not construct churches there? Whose feelings am I looking not to hurt?

…Nevertheless, Pope Shenouda III had a famous saying regarding leadership. In his day, the majority of professors in any faculty, medicine or pharmacology for instance, were Christians. Today they are the minority. Pope Shenouda III used to jokingly question why Christians have become so stupid all of a sudden!

What I expect from President Morsy is to fulfill his promises, with regards to the regulation of constructing churches, the appointment of a Christian vice-president, and the establishment of a civil state.

Can we then say that you support the Law for Houses of Worship, the proposed law stipulating similar regulations for the building of churches and mosques?

Not necessarily the Law for Houses of Worship. The instructions should be, “when a Christian builds a church, congratulate him, and don’t go and demolish it.”

How do you comment on the series of attacks by Salafi extremists on churches recently? Will there be intervention from the Egyptian church?

We pray to God, and demand those in charge to assume their roles. We will not fulfill the duties of the state on its behalf.

Did the church approach the state’s institutions about this issue, included the designated ministries?

We have pointlessly talked about this for the past 50 years.

Do you expect any changes in Coptic marriage and divorce rules under the leadership of Pope Tawadros II?

Leave this to us, it is an internal affair that is peculiar to religion, which does not relate to politics. My reference is the Bible, no divorce except in the case of adultery.

Could you explain to us the issue of marriage annulment?

This means that someone gets married, and then it is found that this person is sterile, they can annul the marriage. This shows the importance of carrying out pre-marital medical check-ups. If the wife knows he is sterile and is happy with the marriage, this would not be a case of marriage annulment. The marriage annulment is enforced when one party proclaims themselves as sane and proves to be the opposite. The other thing is, if he cannot enter sexual intercourse with his wife. This annuls the marriage. Also if the partner has dangerous diseases such as HIV/AIDS for instance, and has not revealed this to the other partner.

Since there is severe criticism aimed by many in support of modifying the divorce law, will the church amend anything in the near future?

How can I change anything? I do not have any choice apart from studying the entire law from scratch. If we find the case supporting an opportunity of improvement, why would we say no?

Regarding expatriate Copts, do you believe that under his holiness Pope Tawadros II, there will be communication with them to make their role more effective in the internal matters of the country? Will there be visits to them?

These will be the usual visits to Church followers, who shall not interfere with political affairs in any sense. My politics follow my country, government, and parliament. What then relates the expatriate Copts to our internal affairs? Will they do anything for us? Nothing. On the contrary, we believe that America targets its own interests, in addition to the interests of Israel.

So do you still regard the expatriate Copts to be co-patriots?

They are still co-patriots, and by the way, the majority of them are acting as if they were still living in Egypt. They are so much in love with the country, with all of its constituents, including Muslims and Christians. While they live abroad, their hearts are with us. However, that group that follows an extremist hard line do not represent a sizable entity.

Will the Egyptian Church in the coming period embrace Coptic political youth movements?

The Church spiritually safeguards them, but politically speaking, we do not interfere in this area. They are free to establish politically-based groups, but this is not part of church affairs.

What other priorities are there for the church after the enthronement ceremony?

Amending the Patriarchal Election Law of 1957. This will be revised and whatever can be amended will be considered.

The amendments will tackle the number of candidates and their qualifications. The number should significantly increase compared to the current situation. It is impossible to make 2,400 vote for millions of people worldwide. Instead of 2,400 the figure should be, for example 10,000; at least we should multiply it five times. The candidates should be selected in such a way to ensure they are “high-quality.” High quality will produce a good product. If you don’t make it easy for everybody to have a vote, you will hurt yourself, and hurt the country.

In case of the complete implementation of Islamic Shari’a, what will be the reaction of the Church?

We welcome anything that will not affect our faith. If something does hurt my conscience and my faith, I will not agree. I will reject it strongly.

What do you expect to be the ceiling of the relationship between the church and the presidency under Pope Tawadros II?

We always manage to establish good relations with those in charge. The Bible assigns dignity to the people of dignity, and assigns respect to those worthy of respect. We always love and respect the rulers, as long as they work for the benefit of the country.

What is the nature of the relationship between the church and the Muslim Brothers?

You see, as long as everybody has own faith, while not interfering in my faith, or tries to convert me without my agreement, that would not constitute any problem. But if he interferes and hurts me, I will not obey him.

What were the major issues discussed in the Holy Senate with Pope Tawadros II?

We discussed issues of personal affairs, and implementing our religious law in lieu of Islamic Shari’a, which is by the way good for our Muslim brothers and sisters. However, we have our own religious law. We talked about the affairs of the nation and the church.

Will there be any coordination with Al-Azhar regarding media controversies?

Dialogue with Al-Azhar conforms to one main rule; a dialogue on virtues and not beliefs. We talk about faith, tolerance, compassion, and self-neglect. We are neither infidels nor idolaters.

Within your area, Helwan and Masaara, do you have any particular issues with the authority?

My main concern now is with the permits required to construct new churches. I am attempting to build five or six new churches, including a church that is already constructed but cannot be opened. We even managed to secretly build a church to respond to our community’s needs, we are waiting for the permit issuance. We are cooperating with the Muslims on this as well, and everything is quite fine.

The matter depends on the people and the government. The people are good, so who is the bad party?

He laughs. Governors, heads of security, and commissaries are all my friends, but I cannot oblige them on the basis of friendship to implement something related to his job. It is not viable. We always think of taking our rights without jeopardising the rights of others.

Were you invited by President Morsy to discuss issues relating to the Coptic affairs?

No, but I was invited by the Grand Murshid of the Muslim Brotherhood, Dr. Mohamed Badie, and I responded to his invitation.