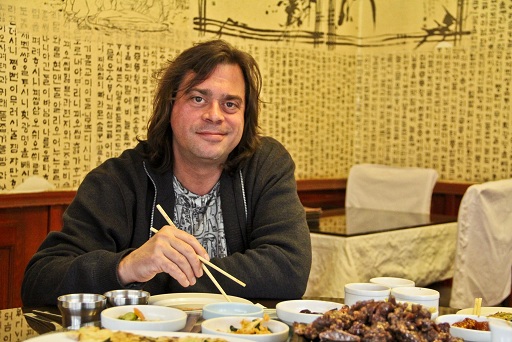 Last Friday Pete Wells, restaurant critic for the New York Times, published a review of Guy Fieri’s American Kitchen and Bar in Times Square. To call it “scathing” does not do it justice. Wells asks a series of questions including, “when you hung that sign by the entrance that says, WELCOME TO FLAVOR TOWN!, were you just messing with our heads?”

Within hours the review went viral. But was it fair?

If you’ve been following my column these past few weeks you’ll know that this is something that has been on my mind lately. Call it an existential crisis. Why do I do this? Do I know what I’m doing? Does it serve any purpose? How long before my belt breaks?

Which is not to say that we are unqualified. I owned a restaurant in Cairo; I have been involved in the food and beverage industry since the ‘90s; I teach a course on food history; I have studied the science and literature of food; I know my way around the kitchen; and I began eating at a very early age. So there is some experience there.

“It’s a matter of taste” is a sentiment that expresses what many feel about food, art, music and love, but as in all such endeavours, the best laid schemes often go awry; so there must be some agreed-upon standards. Those of us with experience know what they are even if we would be hard-pressed to list them. Some things you have to do; others you must not. As every lover knows. The difference is that in love it is bad form to kiss and tell whereas with food writing it is what we are paid to do.

If I attempted a list, item one would be integrity. Critics, chefs and consumers live in a symbiotic, sometimes parasitic, relationship; we cannot survive one without the other and integrity is the life blood of our shared bond.

This, in essence, is Wells’ complaint. Fieri has made a name for himself as a chef to the people. With programmes like Diners, Drive-Ins and Dives, which attract more male viewers than any other food show, he has become the TV personality tourists would most like to hang out with for a beer and a bratwurst.

Times Square—foodwise—is notoriously touristy. There are some restaurants there that I like, but they are of the quick, comfort food kind: Grey’s Papaya for hot dogs; Shake Shack for burgers.

The problem with Guy’s American Kitchen and Bar is that Fieri trades on his image as a food buddy and yet instead of serving simple, flavourful dishes that go down well with a Budweiser, he has tried to capture the would-be foodies too, the good ol’ boys who watch the Food Network and head to NYC for their summer vacation.

Which is precisely what brings Wells to ask barbed questions such as, “when you saw the burger described as Guy’s Pat LaFrieda custom blend, all-natural Creekstone Farm Black Angus beef patty, LTOP (lettuce, tomato, onion + pickle), SMC (super-melty-cheese) and a slathering of Donkey Sauce on garlic-buttered brioche, did your mind touch the void for a minute?” He has a point.

Putting foodies and civilians at the same table is like putting parmesan on your shrimp risotto. You just don’t do it; it’s one of the rules. And this gets to the heartburn of the matter: to my taste cheese on seafood tastes like rojak on roadkill, but many a restaurant-goer might think it’s a good idea or—horror of horrors—like it.

Which brings us back to the conflict inherent in the chef, critic and customer ménage à trois: we all have different kinks. The only way around this is to trust one another, hence the need for unwavering integrity.

It is permissible for the customer—like the museum-goer, the concert-goer or the lover—to say “I know what I like” and leave it at that. Not so for chefs and food critics. We must know the rules; we must have a certain level of experience; we should know the differences between our tastes and those of the people we serve; and we must be humble enough to allow that ultimately they are the ones who should be judging us and not the other way around.

Ok, enough of this. Next week it’s back to eating and criticising.