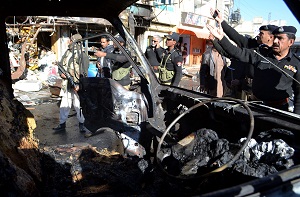 Quetta, Pakistan – A bomb tore through a Pakistan army vehicle escorting children home from school on Wednesday, killing four soldiers and a woman in the southwestern city of Quetta, police said.

The attack also wounded more than 20 people, one day before Pakistan welcomes Muslim leaders at the Developing Eight summit in the capital, where international conferences are rare due to Taliban and Al-Qaeda-linked violence.

He said four soldiers and a woman were killed when the bomb, planted on a motorcycle, was detonated by remote control.

“Twenty-one people were wounded in the blast, including three soldiers. Eighteen are civilians. Six or seven of them are in a serious condition,” Shakeel said.

Witnesses said the motorbike appeared to have been parked near shops to avoid any suspicion in the Shahbaz Town neighbourhood near some of the most prestigious private schools in Quetta.

“I was returning to my shop after saying prayers in a nearby mosque,” said shopkeeper Mohammad Talib, 45.

“Soon after, I heard a huge blast. There was dust and smoke. I saw an army vehicle in flames. Shards of glass were littered on the road. There was panic, people were screaming, others were fleeing the area.”

“After some time police and FC [Frontier Corps paramilitary] troops arrived. They fired in the air to scare people away. Soon shops were closed and people emptied the area.”

Quetta is more than 640 kilometres southwest of Islamabad, where Pakistan has stepped up security significantly for the summit. The event coincides with the holy month of Muharram, a magnet for sectarian attacks.

It will mark the first visit by an Egyptian president to Pakistan in four decades and the first by a Nigerian leader in 28 years.

There was no immediate claim of responsibility for Wednesday’s attack but Quetta and its province Baluchistan are frequently hit by bomb attacks.

The oil- and gas-rich area borders Iran and Afghanistan, and suffers from sectarian violence, attacks by Taliban militants and a tribal insurgency.

Baluch rebels rose up in 2004, demanding political autonomy and a greater share of profits from the region’s mineral resources.

Baluchistan has also been a flashpoint for violence between majority Sunnis and Shi’as, who make up around 20 per cent of the population.