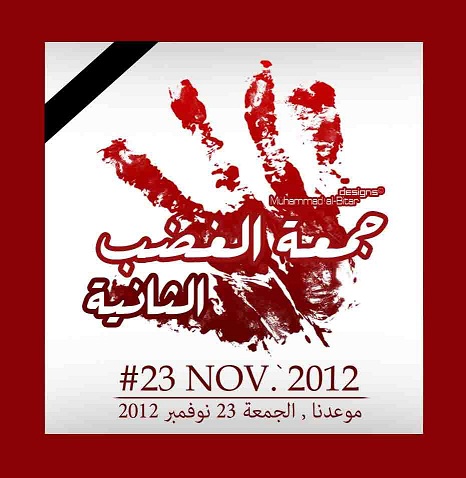 A planned protest for the end of the week has been upgraded from a “million-man march” to a “Friday of rage”, following three days of clashes in Mohamed Mahmoud Street.

The Popular Current and other political movements announced their plans to commemorate the first anniversary of the Mohamed Mahmoud Street clashes at a press conference Monday.

“The lack of justice and punishment of those responsible for killing Egyptians since the beginning of the January 2011 revolution is what led to the killing of even more protesters,” said Heba Yassin, a media spokesperson for the Popular Current, confirming the group’s participation in the protest.

Fuelling the rage was the shooting of Al-Dostour and 6 April Youth Movement member Gaber Salah Gaber during clashes on Tuesday morning. Gaber was pronounced brain-dead on Wednesday.

Political movements taking part in the protest are meeting on Wednesday and Thursday to agree on the specific demands of the protest.

Basic demands include justice for those killed since the beginning of the revolution, re-trying former regime figures and members of the Supreme Council of the Armed Forces (SCAF), firing Hesham Qandil’s cabinet, and dissolving the Constituent Assembly, according to Haytham Mohammadein, a member of the Revolutionary Socialists’ political office. Mohammadein confirmed that his group would take part in the protest.

The 6 April movement (Ahmed Maher front) was still undecided about their participation as of Wednesday evening, according to movement leader Mohamed Adel, as was the Strong Egypt party.

“The protest calls for the revolution’s initial demands; none of which have yet been achieved,” ESDP leader Farid Zahran said, referring to the revolution’s demands for social justice, greater freedoms and a representative constitution.

The Freedom and Justice party (FJP), the Muslim Brotherhood’s political wing, announced its disagreement with the protest’s demands and said it would not participate.

“How do I participate in a protest against me?” FJP spokesperson Ahmed Sobei’ asked.

The FJP’s current focus is on the Constituent Assembly which, according to Sobei’, has exerted great effort to draft the constitution.

The moderate Islamist Al-Wasat party also declined to take part in the protest, citing its rejection of demands to dissolve the Constituent Assembly.

“We have reached agreement over the hardest articles in the constitution,” Al-Wasat spokesperson Amr Farouk said. “How can we disagree on the simple matters?”

Most non-Islamist, civil bloc and Coptic Church members withdrew from the assembly this week. Farouk stated that tremendous effort is being exerted to convince these members to return.

Sobei’ also had reservations about the demand for justice for those killed during the revolution, stating that the only way to achieve that would be through the resignation of the prosecutor general.

“The people calling for protests today are the same people who went against President Morsy when he tried to sack the prosecutor general,” Sobei’ said.

Al-Dostour party’s media office disagreed with Sobei’s statements, stating that justice for victims could be achieved through reform of the Ministry of Interior, which it said destroyed evidence of protester deaths. They added that Morsy didn’t punish the ministry or attempt reform.