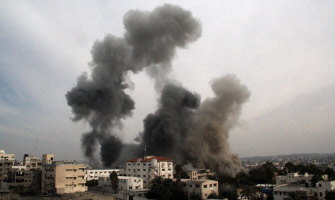 The long awaited announcement of a truce between Israel and Hamas was postponed, as fighting escalated on both sides.

On Wednesday morning, an explosive device went off on a Tel Aviv bus, leaving seven injured. Ezzat Al-Rashq, member of the political bureau of the Islamic Resistance Movement, commonly known as Hamas, said that the explosion was due to Israeli aggression against Gaza.

A truce mediated by Egypt, securing a ceasefire followed by easing the siege on Gaza, was expected to be announced on Tuesday night,  but did not transpire. On Tuesday, Israel dropped leaflets over Gaza telling Palestinians living in Al-Atatra, Beit Lahiya, and Beit Hanoun to evacuate their homes, creating fears of a ground operation.

“Since 2009, every time a truce breaks down, rockets are fired from armed forces in Gaza and Israel responds with raids. It is a struggle over who has the final hit, who has the strongest hit, and who can hit more in the psychological war,” said Tawfiq Okasha, an expert on Israeli affairs in the Ahram Centre for Political and Strategic Studies.

“In any war, the actions of the armies are very violent in the hours before the truce, because both sides are trying to change the facts on the ground before the ceasefire,” Okasha said.

At this point, a truce will either be reached soon or ground raids are expected. Okasha expects Israeli air raids to intensify overnight and then Israel will determine if Hamas has backed off, if it does, then Israel may agree to a ceasefire. However, he believes that if Hamas escalates and there are heavy losses on the Israeli side, “then a ground operation is inevitable,” Okasha said.