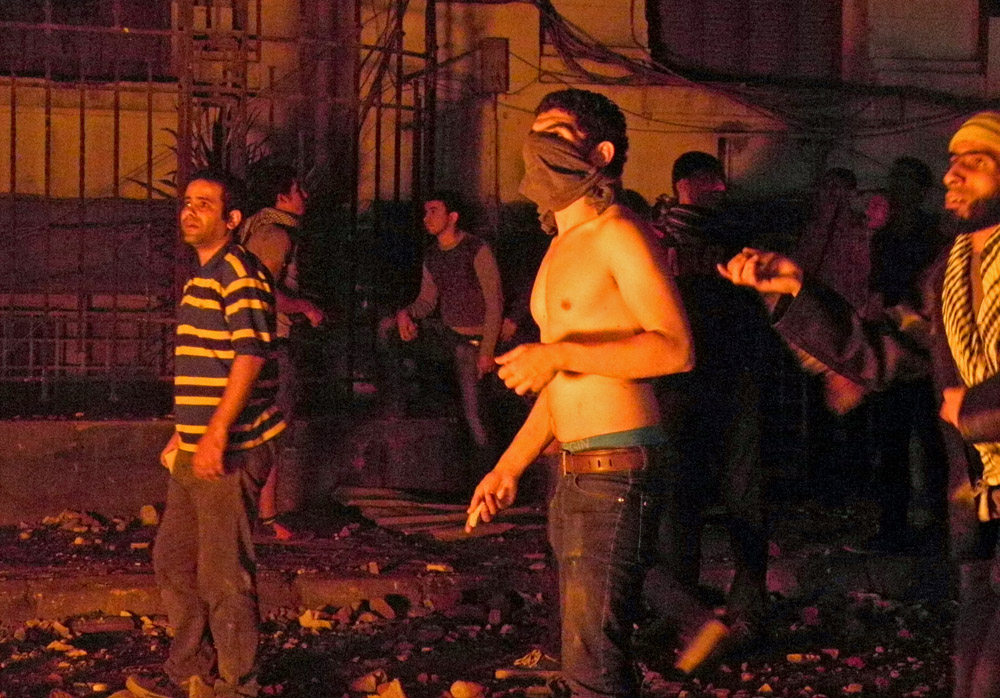 The Dostour Party and 6 April Youth Movement member, Gaber Salah Gaber, was pronounced brain dead on Wednesday, the movement’s spokesperson Mohamed Adel confirmed. Currently, he is in a coma in critical condition, doctors say they are unsure if he will recover.

If Salah Gaber succumbs to his wounds he will be the first official casualty of the clashes currently taking place on Mohamed Mahmoud Street in Downtown Cairo. The clashes entered their third continuous day on Wednesday, as a fire broke out in the Al-Jazeera Mubasher headquarters surrounding Tahrir square in the morning and residents reported hearing tear gas being fired.

Salah Gaber was shot on Tuesday and was receiving emergency medical treatment at the Qasr Al-Eini hospital. He was suffering from severe wounds to the head and neck believed to have been caused by shotgun pellets, one of which was lodged in his brain.

Mohamed Saeed, another Dostour Party member, was shot from close range three times, Adel said, noting that he is in critical condition but doctors expect he will make a full recovery within three months.

A statement released by the youth movement pledged they would “not hesitate to prosecute the corrupt” and would “not fail to detect injustice” regardless of interference.

The Egypt Strong Party released a statement on Wednesday calling on President Mohamed Morsy to assume full responsibility in purging the Ministry of Interior and other security agencies, asking him to dismiss the interior minister and hold him accountable for last year’s clashes. The interior minister, Ahmed Gamal El-Din, served under the capacity of deputy minister for general security within the ministry during last year’s Mohamed Mahmoud clashes.

On Tuesday night, protesters discovered soldiers had positioned themselves in the American University in Cairo (AUC) main building on Mohamed Mahmoud Street. A Daily News Egypt reporter on the ground said it was unclear whether or not protesters managed to dislodge the soldiers from within the AUC compound. Daily News Egypt noted a group of 200 protesters remained on Mohamed Mahmoud whilst the rest left en-masse toward the Cabinet off Qasr El-Eini Street. As the night stretched on police were reported using tear gas and armoured vehicles to keep the protesters at bay.

At the time of writing, protesters were entrenched in an exchange of Molotov cocktails, rocks and tear gas with the security forces in Mohamed Mahmoud Street. On Sheikh Rehan Street, young children and teenagers were seen chanting names at the Central Security Forces (CSF) which had occupied the French Lycee school. According to the Egyptian blogger Zeinobia, CSF soldiers were removing furniture and computers from within the school and throwing them at protesters, who had been setting tires aflame.

A volunteer at one of the field hospitals in the area said there was an estimated 600 people injured since the onset of the clashes on Monday.

Ragia Omran, an activist and lawyer with the No for Military Trials movement, said that 83 people had been detained by security forces by Wednesday afternoon, and unconfirmed reports were pouring into the office. On Tuesday the movement recorded 33 arrests, bringing the total to 116. Omran said this number is expected to rise as they work through the incoming reports.

The presidential chief of staff Rifa’a El-Tahtawi said in an exceptional press conference that the president and his team are well aware of what is happening on the streets of Egypt. According to him, Morsy sees Egypt as his main concern, calling the situation in Gaza a matter of national security.