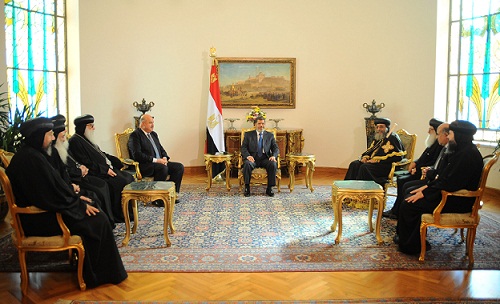 In their first official meeting after the papal enthronement, the church delegation “thanked Morsy for appointing Tawadros,” Yasser Ali, presidential spokesperson said. The delegation included Bishops Pachomious, Paula, Moussa, and Youssef. They all confirmed to the president that Egyptian society is unified.

Morsy addressed the pope telling him “that the rights of all Egyptians fall under Tawadros’s responsibility.” During the meeting, the president also spoke about the constitution, stressing that the main priority was to achieve constitutional stability.

Morsy did not attend the papal enthronement on 17 November. Presidential chief of staff, former Ambassador Refa’a El-Tahtawy, and Prime Minsiter Hesham Qandil were, however, present.