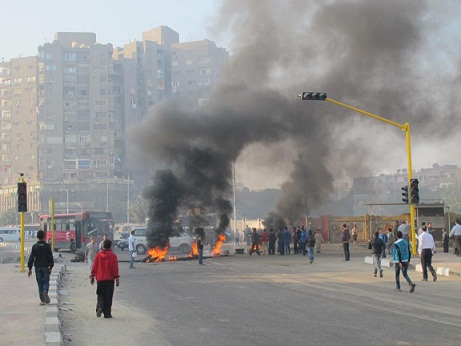 Residents of the island of Qorsaya threatened on Wednesday to block the Bahr Al-Aazam road if the military remained on the island’s lands.

Ashraf Seif, resident of Qorsaya island, said the residents met with the military commander of the central region and showed him documents proving their legitimate right to stay in the island, before he promised them that the military will leave the island in 48 hours. “We will escalate the situation if they don’t leave the island by Friday.”

Seif added that the military claimed they own five acres of Qorsaya’s land. He said they broke into the island and occupied 35 acres. “The island consists of many houses, where every house has a garden. The military took all the gardens, leaving only the houses for us.”

Magdy Abu Gomaa’, resident of Qorsaya, said the State Council ruled on the eligibility of Qorsaya’s residents to stay on the island, back in 2007.

The clashes started on Sunday morning when protesters from the island of Qorsaya in the suburbs of Giza blocked the Bahr Al-Azam road, disrupting traffic. They burned tires and the army responded by firing rubber bullets at them, leaving at least one of them dead, according to the Egyptian Centre for Economic and Social Rights (ECESR).

The death toll, according to the centre, had reached four by Sunday afternoon, the latest being one of the injured who died at Al-Qasr Al-Einy hospital on Sunday. At least eight were injured in the clashes said Dalia Mousa from the Egyptian Centre for Economic and Social Rights (ECESR). Thirteen residents of the island were arrested and taken to C28, the military prosecution headquarters. She also said that five people who tried to escape the clashes jumped into the Nile and as of Sunday afternoon are missing.