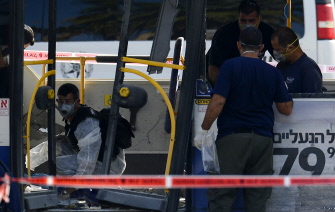 A blast ripped through a bus in Tel Aviv on Wednesday injuring at least 17 people in what Israel said was a “terrorist” attack, further vexing international efforts to end relentless Gaza-linked violence.

“A bomb exploded on a bus in central Tel Aviv. This was a terrorist attack,” Prime Minister Benjamin Netanyahu’s spokesperson Ofir Gendelman said on his official Twitter account.

Medics said 17 people were wounded, including one in moderate to serious condition while another three sustained moderate injuries.

Police said the blast took place on a street which runs just behind the Kiriya, Israel’s sprawling Defense Ministry in central Tel Aviv.

Television images showed the bus with its windows blown out and its metal frame contorted from the force of the blast, in images reminiscent of scenes from the second Palestinian intifada (2000-2005).

The front window was completely shattered and glass littered the floor as the wounded were loaded into ambulances by an army of medics.

Just before the explosion, the UN chief had called for an immediate halt to militant rocket attacks on Israel after talks with Palestinian leader Mahmoud Abbas in the West Bank city of Ramallah.

Israel’s offensive, launched on November 14 with the targeted killing of a Hamas military chief, has killed at least 136 Palestinians, while five Israelis, including a soldier, have been killed in rocket attacks.

A senior Hamas official told AFP in Cairo that a key sticking point in truce talks was the timing of when Israel would begin easing its six-year blockade of Gaza.

Netanyahu had told Clinton on Tuesday night that he was ready to agree to a “long-term solution” as long as the rocket attacks from Gaza stopped.