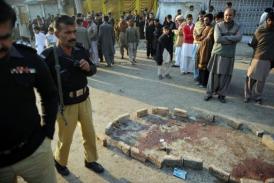 ISLAMABAD — Muslim leaders gathered for a rare summit in Islamabad as militant attacks killed 36 people across the country on one of the deadliest days of violence claimed by the Taliban in months.

The string of attacks on Shiite Muslims and Pakistani security forces underscored the immense security challenge in a country where Taliban and Al-Qaeda-linked extremists bitterly oppose the US-allied government.

Twenty-three people were killed and 62 wounded overnight in Rawalpindi, the twin city of Islamabad, where Iranian President Mahmoud Ahmadinejad and Turkish Prime Minister Recep Tayyip Erdogan are chief among the summit guests.

Police said a suicide bomber struck a procession of Shiite Muslims who were commemorating the holy month of Muharram, which is frequently targeted by sectarian extremists in Pakistan.

Police used lamps and torches to work through the night, and confirmed the final death toll after daybreak with eight children among the wounded.

It was the deadliest bombing in Pakistan since 29 people were killed in the northwestern district of Khyber on June 16 and the worst attack on Shiites since February 17 when a suicide bomber killed 31 people in northwestern Kurram.

The Pakistani Taliban claimed responsibility for the attack, another explosion Wednesday that killed two people near a Shiite mosque in Karachi, and attacks targeting security forces in the northwest which officials said left five police dead.

Spokesman Ehsanullah Ehsan told AFP that Shiites are “defiling the Prophet”. The Taliban have been fighting an insurgency against security forces since 2007, one of the chief reasons why Pakistan so rarely hosts international events.

Human rights groups frequently criticise the government for failing to clamp down on extremist Sunni Muslim sectarian groups, such as Lashkar-e-Jhangvi, which have been accused of killing thousands of Shiites.

But Pakistan has been determined that Thursday’s Developing Eight (D8) summit will present a different image of the country as it gathers together Bangladesh, Egypt, Indonesia, Iran, Nigeria, Malaysia, Turkey and Pakistan to promote trade.

The government has said it wants the summit to strengthen its international standing and help “remove misconceptions (about the country) created in a section of international media”.

The capital was in lockdown to safeguard the event. Thousands of extra police and paramilitaries deployed. Schools were closed, Thursday was declared a partial public holiday and motorcycles were banned close to government installations.

India on Thursday also asked Pakistan to increase security at its embassy in Islamabad, fearing possible demonstrations or reprisals over its execution of Pakistani militant Mohammed Kasab for his role in the 2008 Mumbai attacks.

And on the outskirts of the northwestern city of Peshawar, militants attacked a police post Thursday, killing one police official and abducting another, police said.

There was no claim of responsibility for that attack, or another in the southwestern city of Quetta Wednesday when an army vehicle escorting children home from school was targeted, killing four soldiers and a woman.

Aside from the unrest in Pakistan, eight days of violence between Israel and the Palestinian movement Hamas will also loom large over the D8 proceedings.

Egyptian President Mohamed Morsi — who was thanked by the United States for helping to broker a ceasefire between Israel and Hamas — bowed out of the talks as state TV in Egypt said he would now stay home to monitor the truce.

The ceasefire was agreed in a deal between Israel and Palestinian group Hamas after eight days of violence in and around Gaza killed at least 160 people.

Among nations in the D8, which was founded in Istanbul in 1997, Nigeria is the only member which is not majority-Muslim. Its population is roughly divided between Muslims and Christians.