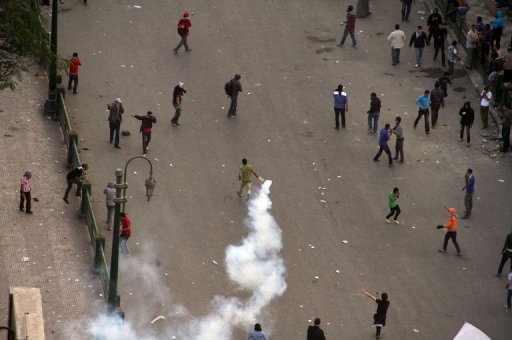 The offices of the Freedom and Justice Party (FJP), the Muslim Brotherhood’s political arm, were torched in the canal cities of Ismailiya and Port Said, the broadcaster said.

It earlier reported that the Suez office was also set ablaze, but it later withdrew the report.

A branch office of the Islamist party was set on fire in Alexandria and protesters were heading to the group’s main office in the Mediterranean city’s Sidi Gaber neighbourhood, security officials said.

“The situation in Alexandria is tense and security forces are eager to exercise self-restraint and maintain security and protect vital establishments,” General Abdelmawgud Lutfi, head of Alexandria security, said in a statement.

Earlier an FJP official told AFP the party’s office was stormed in Alexandria, where clashes broke out between rival demonstrators.

Hundreds also took to the streets of the Red Sea resort city of Sharm el-Sheikh against Morsy’s declaration, chanting: “No to merging the revolution with authoritarianism.”

On Thursday, Morsy assumed temporary sweeping powers that supporters say will cut back a turbulent and seemingly endless transition to democracy, but outraged critics who say he has now become a dictator.