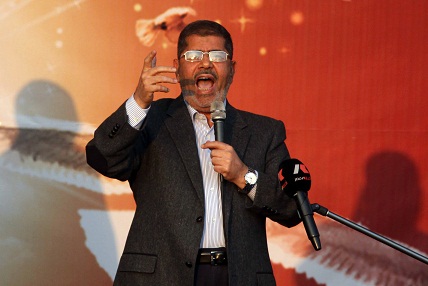 Legal experts have challenged the scope of President Mohamed Morsy’s recent constitutional declaration to grant himself sweeping new powers. The declaration, issued by Morsy Thursday, said the president’s decisions were beyond judicial review.

The declaration asserted that all of the decisions made by Morsy since he assumed office are “final and binding and cannot be appealed by any way or to any entity.” The declaration also annuls any lawsuits related to president’s decisions.

“The resignation of the prosecutor general is one of the revolutionary demands,” former presidential hopeful Khaled Ali said. “However, you can’t put it side by side with a tyrannical decision. It’s as if you’re offering me rice pudding made with sour milk and you tell me you’ve hand-picked the rice. Would I eat the pudding?”

Jermeen Nasr, a founding member of Al-Dostour party said, “most of the decisions that President Morsy declared on Thursday obviously give him absolute power and authority to control all the country’s institutions; the executive, the legislature and the judiciary.”

“Everybody should know that Egypt is going through disturbances; chaos and rebellion has reached the judiciary,” constitutional expert Tharwat Badawy said, adding that it was the president’s right to take all the procedures necessary to overcome such circumstances, according to the principle “necessities permit taboos.”

Nevertheless, Fouda stated that what Morsy released on Thursday was not a constitutional declaration but a decision to issue a law. Those affected by that decision could question its constitutionality, referring it to the Supreme Constitutional Court (SCC), Fouda said.

“The decision shall not turn into a law until the legislative council looks into it and votes on it,” Fouda said, referring to the Peoples’ assembly. “Until then, such a decision remains administrative in nature and thus putting it under the administrative judiciary’s jurisdiction.”

Egypt’s People’s Assembly was dissolved in June following a verdict by the SCC deeming it unconstitutional. There have not yet been fresh elections.

Commenting on the article stating that any decisions made by Morsy are irreversible, Fouda said judges could put it to one side.

The declaration allows Morsy to “take any actions and measures to protect the country and the goals of the revolution.”

“Giving absolute power and authority to the president is against all revolutionary demands,” said Nasr.

Morsy also moved to protect the Constituent Assembly by announcing that no judicial authority is able to dissolve the assembly or the Shura council. He also extended the deadline for drafting the constitution by two months.

Nasr criticised Morsy’s move to extend the time frame for the drafting of the constitution, saying “supporting the Constituent Assembly despite most of the civil faction resigning is against the democratic path of the revolution.”