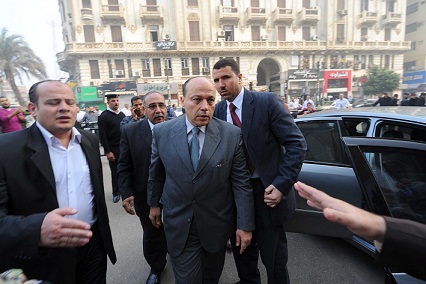 The newly appointed general prosecutor started his first day of work by meeting with staff of his technical office.

Following the meeting held Saturday afternoon, which included some members of the public prosecution, Tala’at Abdallah said he was offered their full support. Abdallah added that he plans to take all cases in the prosecution equally seriously, according to Al-Ahram.

Abdallah was appointed by a presidential decree announced by Morsy on Thursday night after he dismissed Abdel Meguid Mahmoud, who has served as prosecutor general since Mubarak’s era.

Abdallah made a statement on Friday night, giving instructions to the public prosecution not to leave their places of work on Saturday, “in anticipation of the circumstances that the country is going through… and so that the prosecution carries out its task of serving the country and the citizen.”

Ahmed Ragheb, co-founder of the “Try Them” campaign, which calls for the trials of former regime figures, said that the statements made by Abdallah on Friday night could mean one of two things. Ragheb said Abdullah’s instruction for people to stay at work on Saturday was either intended to inform striking judges that the public prosecution will continue working, or to indicate that there will be many arrests and the public prosecution should be ready to process these.

A group of judges, who belong to the “Independent Judges Movement” released a statement on Saturday saying that the decisions Morsy made, “came at the expense of democracy and freedom.” The statement was signed by 20 judges.

Some judges plan to gather at the High Court Building in Downtown Cairo on Saturday afternoon in protest to the decisions.

The three are accused of attempting to overthrow the government, according to independent newspaper, Al-Dostour Al-Asly. Abdallah also said on Saturday that “military coups” could be punishable by time in prison or the death penalty.

Abdallah added he hasn’t taken any decisions banning anyone from travelling yet, including Mahmoud. Nor has he had the time to read a complaint filed against Mahmoud. Mahmoud has been accused of freezing investigations into former minister of finance Yousef Boutros Ghaly.

Morsy’s declaration also passed a decrees ordering the retrials of those accused of killing protesters and a “Revolution Protection Law.”

The Revolution Protection Law itself has left human rights lawyers in distress. Malek Adly from the Egyptian Centre for Economic and Social Rights described it as, “an emergency law.” The infamous emergency law had been in place in Egypt since 1981 and only expired in May 2012. It gave the government the right to detain individuals without having to give explanation.  Adly said that the same rules apply to the Revolution Protection Law, which he believes limits freedom of expression and peaceful protests. “This law has nothing to do with the revolution,” Adly said.

The retrials and reopening of investigations of those who killed protesters under the former regime is planned to be carried out by a body named the “Revolution’s Prosecution,” which will include members of the public prosecution along with investigating judges from the Ministry of Justice. The revolution’s prosecution will be housed in the High Court Building. The retrials will start once new evidence appears in these cases. Adly, a lawyer who’s worked on such cases says that there are no new recordings, tapes or new witnesses. He says that most of the evidence has been destroyed.

“The issue is much bigger than trying one person… the first retribution is restructuring the Ministry of Interior and appointing a civilian minister. The ministry has to change from a protector of the regime to the protector of the people,” Adly said.