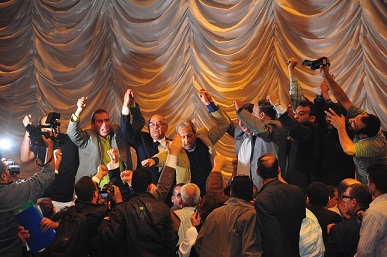 There was a tense atmosphere at the Press Syndicate general assembly on Sunday morning. It was a polarised meeting, mirroring a division among the Egyptian public over President Mohamed Morsy’s recent constitutional declaration.

Witnesses at the assembly said that some journalists tried to kick out the Head of the Syndicate, Mamdouh Al-Wali (a Muslim Brotherhood member). Amid the chaos chants of “leave, leave” broke out several times.

Mohamed Sweed, a journalist who was present throughout the meeting said “there were lots of tensions and there was large polarisation as a result of the political conditions in the country.”

Throughout the assembly there was disagreement over whether or not the minimum requirement of journalists needed for the assembly to convene had arrived or not.

“The head of the syndicate didn’t want the assembly to be held and described it as a meeting for journalists instead of a general assembly,” Sweed added.

This angered journalists who in turn started chanting against the Brotherhood, with chants like “Down with the rule of the Supreme Guide,” breaking out.

Journalists repeatedly clashed with each other and many got into small physical confrontations.

Former head of the syndicate, Galal Aref, was able to restore some order when he took the floor. “What is happening to journalism is part of what is happening in the country and if we save journalism, we will save the country… . We are the guardians of this country, before the police and the army.” Aref said.

Halfway through his speech, journalists pointed at him chanting, “This is the head of the syndicate.”

At 3.20 it was announced that half the members of the syndicate, the minimum requirement for a general assembly, had registered their names. Following that announcement, there was more chaos as some of the journalists called for a “no-confidence” vote in Al-Wali. The assembly announced in the afternoon that it would be in permanent session.

The assembly agreed to march to Tahrir Square on Sunday afternoon in a show contempt for constitutional declaration. The syndicate has also agreed to will join protesters on Tuesday in marches which will converge at Tahrir Square.

The assembly tasked the board of the syndicate with calling for a general conference for all journalists before the end of December, when the threats facing journalists will be discussed, as well as legislation relevant to the press.

Finally, the assembly supported the syndicate board’s decision to withdraw from the Constituent Assembly because the suggestions of the syndicate and the Supreme Press Council weren’t taken into consideration.