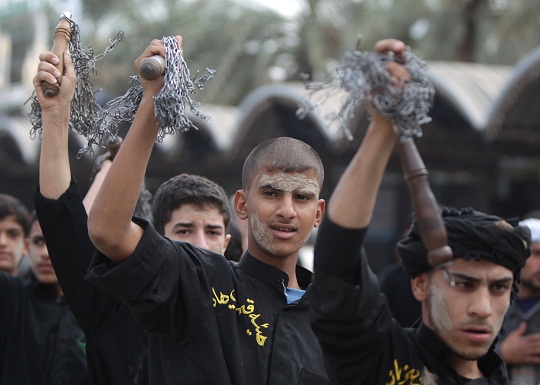 Karbala (AFP) – Millions of Shi’as flooded the Iraqi shrine city of Karbala for the peak of Ashura rituals on Sunday, which have been largely spared the deadly attacks which struck pilgrims in past years.

Throngs of pilgrims beat their chests and some used swords to make cuts on their heads as a sign of mourning for Imam Hussein, grandson of the Prophet Mohammed who was killed in 680 AD by the armies of the caliph Yazid.

Tradition holds that the revered imam was decapitated and his body mutilated. Hussein’s body is buried in the holy city, 100 kilometres (60 miles) south of Baghdad, and his death has become a formative event in Shi’a Islam.

A man told black-clad pilgrims, many of them in tears, the story of the battle in which Hussein was killed, over loudspeakers near the shrine where he is buried.

Karbala provincial governor Amal Al-Din Al-Har told AFP that about three million pilgrims, including 200,000 from foreign countries, have come to Karbala for the rituals.

Lieutenant Colonel Ahmed Mohammed Al-Hasnawi, the command’s spokesman, meanwhile said that its forces are also preparing to protect pilgrims on their way back to their homes.

Pilgrims are most vulnerable when they are going to and from Karbala, when they are not protected by the heavy security in the city itself.

Har said that there will be 2,400 vehicles from various Iraqi ministries and from Karbala province to help transport pilgrims home.

There have not been any attacks on pilgrims in Karbala province so far, Hasnawi said.

This is the third year since the 2003 US-led invasion that Iraqi security forces have been in sole charge of security during Ashura.

Pilgrims were often targeted by bombings in past years that left dozens dead, including a wave of attacks against pilgrims the day before the peak of Ashura rituals last year that killed 28 people and wounded 78.

A car bomb against Shi’a pilgrims north of Baghdad on 17 November this year killed three people and wounded 25, but pilgrims have largely been spared attacks.

Violence in Iraq is down significantly from its peak in 2006-2007, although bombings and shootings remain common, and Iraq’s Shi’a majority is frequently targeted by Sunni militants opposed to the Shi’a-led government in Baghdad.