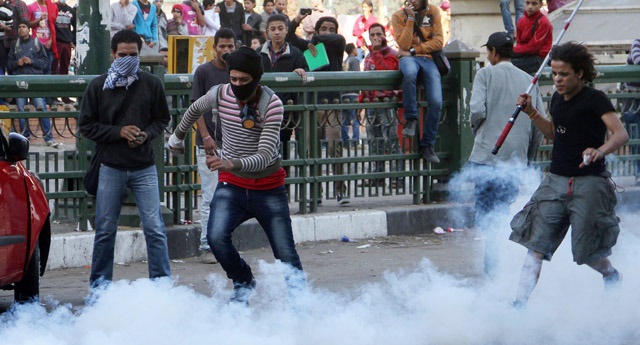 The Egyptian Centre for Economic and Social Rights (ECESR) has claimed that members of the Muslim Brotherhood (MB) are rounding up people and handing them over to the security forces. It is alleged that they are targeting people they believe to have been involved in attacking Freedom and Justice Party (FJP) headquarters.

Malek Adly, a lawyer for ECESR said, “the MB are making lists and taking people from the street.” He reported that MB members have been moving in large groups and forcibly taking people to the central security forces, who transfer them to the police to be arrested.

Adly said “the people who are picked up are charged with attacking MB members, the police or the FJP buildings.” He added, “the ECESR have sent legal assistance to help these people and we have been successful in securing their release.”

Mahmoud Ghozlan, a spokesperson for the MB denied these reports and said “I can’t imagine they would carry out the task of the police. The most they could do is tell the police their names.” He added, “people lie and accuse the MB of things a lot.”

Waleed El Haddad, a spokesperson for the FJP said, “these reports are just rumours. We would not take people to the police; we would report it to the police and let them deal with it.”

Adly reported “this has been happening in Beheira, Port Said, Suez, Ismailia and Alexandria.” The ECESR tweeted on Sunday that their lawyers were able to secure the release of 26 people in Alexandria who claim to have been arrested in this way.

Adly believes this is in response to the destruction of FJP offices around the country, which began on Friday and has continued since then.  Protesters marched on the headquarters of President Mohamed Morsy’s party to demonstrate against the constitutional declaration he made on Thursday night.  Muslim Brotherhood members helped in protecting the headquarters from the protesters.