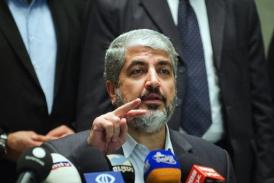 But the statement, backed by a similar one from another member of the Hamas politburo in exile, appeared at odds with sentiments expressed by Hamas members in the Gaza Strip.

“Khaled Meshaal… held a telephone conversation with Abbas in which he affirmed that Hamas welcomes the step of going to the United Nations for state observer status,” the statement said.

The statement, which comes just three days before Abbas is due to ask the UN General Assembly in New York to upgrade Palestinian representation, came after Hamas members in Gaza last week denied offering the president their backing.

But both Meshaal and fellow political bureau member Izzat Al-Rishq said Monday that they supported the move, though they warned it should not “compromise” Palestinian “constants and rights.”

“This move must be in the context of a vision and national strategy to maintain the national constants and rights and based on elements of power in the hands of our Palestinian people, the first of which is the resistance,” Meshaal’s statement said.

In his statement, Rishq said he “welcomed” the UN bid but warned it should not “sacrifice or compromise any inch of Palestinian land from the [Mediterranean] sea to the [Jordan] river.”

On Thursday, the movement in Gaza had denied reports that Hamas Prime Minister Ismail Haniya had offered his own backing for the UN bid in a telephone call with Abbas.

“It is not true,” Hamas spokesperson Taher al-Nunu said in a statement Thursday evening, adding “the media should be more careful.”

Abbas is set to ask for state observer status for the Palestinians this Thursday, a little over a year after a failed bid to secure full state membership.

That request stalled in the Security Council, where is has been blocked by the United States, a permanent member and veto holder in the council.

Israel and Washington both oppose the new bid for enhanced UN status for the Palestinians, but the bid is expected to easily win the required majority in the General Assembly.

On Sunday, Abbas said he was “fully confident” ahead of the new application.

“We are going to the UN fully confident in our steps. We will have our rights because you are with us,” he told a crowd of around 1,000 people demonstrating in support of the bid.

“We ask for a just peace, which is agreed on by the international community which will give us our state with East Jerusalem as its capital. Without that, there is no hope at all,” he said.

Abbas said the attempt to secure upgraded status was backed by many UN member states and by all the Palestinian political factions.

He said the UN move would be followed by steps to bridge the bitter political divide between his Fatah movement and its Islamist rival Hamas. “Today, the UN. After that, reconciliation, and after that, our own state,” he said.