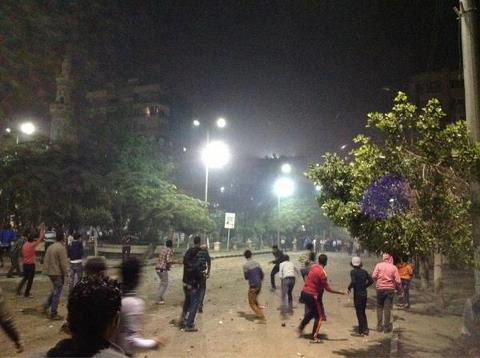 On Sunday night clashes broke out in front of the Freedom and Justice Party offices in Tanta in the Nile Delta. They pitted those who are angry with President Mohamed Morsy’s recent constitutional declaration, and the local FJP members who support it.

The declaration, released on Thursday night, granted Morsy new sweeping powers, sacked the prosecutor general, instructed for there to be re-trials of those accused of killing protesters, and made the Shura Council and Constituent Assembly immune from dissolution.

“Yesterday the clashes happened at night for about an hour and a half,” said Tanta citizen Mustafa Amer of the Tanta branch of Al-Dostour Party. “The FJP headquarters in Tanta was not damaged.”

Amer reported that there was stone throwing and stick wielding, which resulted in injuries, but nothing serious. Most injuries were sustained by the anti-Morsy camp after they were confronted by FJP supporters defending their headquarters, said Amr.

There were reports of fighting in Beni Suef on Sunday, but both the FJP and Al-Dostour said these reports were false.

Shehata said he believed the situation remained calm because Beni Suef is a small, pastoral community and also because members of the Muslim Brotherhood “calmed their youth down.”

Late Sunday, chairman of the Freedom and Justice Party Saad El-Katatni condemned the “bullying and the burning of the headquarters of the party in the provinces,” which he stated, “confirm that there are those who want to spread chaos in Egypt.”

Also on Sunday the FJP issued a statement about this weekend’s attacks on their offices, attributing the attacks to the manipulation of their political opposition. It went on to state, “Joining them were groups of thugs who went on the rampage, destroying and burning the headquarters of the Freedom and Justice Party … others attacked police officers with Molotov bombs and stones, setting public and private institutions on fire.”